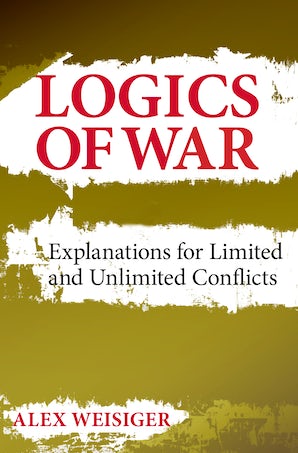 Logics of War is licensed under a Creative Commons Attribution-NonCommercial-NoDerivatives 4.0 International License.

Explanations for Limited and Unlimited Conflicts

Most wars between countries end quickly and at relatively low cost. The few in which high-intensity fighting continues for years bring about a disproportionate amount of death and suffering. What separates these few unusually long and intense wars from the many conflicts that are far less destructive? In Logics of War, Alex Weisiger tests three explanations for a nation's decision to go to war and continue fighting regardless of the costs. He combines sharp statistical analysis of interstate wars over the past two centuries with nine narrative case studies. He examines both well-known conflicts like World War II and the Persian Gulf War, as well as unfamiliar ones such as the 1864–1870 Paraguayan War (or the War of the Triple Alliance), which proportionally caused more deaths than any other war in modern history. When leaders go to war expecting easy victory, events usually correct their misperceptions quickly and with fairly low casualties, thereby setting the stage for a negotiated agreement. A second explanation involves motives born of domestic politics; as war becomes more intense, however, leaders are increasingly constrained in their ability to continue the fighting. Particularly destructive wars instead arise from mistrust of an opponent's intentions. Countries that launch preventive wars to forestall expected decline tend to have particularly ambitious war aims that they hold to even when fighting goes poorly. Moreover, in some cases, their opponents interpret the preventive attack as evidence of a dispositional commitment to aggression, resulting in the rejection of any form of negotiation and a demand for unconditional surrender. Weisiger’s treatment of a topic of central concern to scholars of major wars will also be read with great interest by military historians, political psychologists, and sociologists.

"Logics of War unpacks the so-called black box of war to look at the often overlooked mechanisms that connect the beginnings to the ends of war. Blending qualitative and quantitative analysis in a very ambitious and successful multimethod strategy, Alex Weisiger not only examines the duration of war but also endeavors to offer new explanations for the severity of war. Weisiger presents a new and highly original explanation for the handful of exceptionally long and deadly wars in which one side sincerely demands unconditional surrender."

- Hein Goemans, University of Rochester, author of War and Punishment: The Causes of War Termination and the First World War

"When are wars short and limited and when they are long and destructive? Alex Weisiger supports his theoretically innovative answer to this important but neglected question with systematic statistical analysis and rich historical analysis. Logics of War is an important extension of the bargaining model of war, a wonderful exemplar of multimethod research, and essential reading for all serious students of interstate war."

- Jack S. Levy, Board of Governors' ProfessorRutgersThe State University of New Jerseyco, author of The Arc of War: Origins, Escalation, and Transformation

Alex Weisiger is Assistant Professor of Political Science at the University of Pennsylvania.

Logics of War is licensed under a Creative Commons Attribution-NonCommercial-NoDerivatives 4.0 International License.