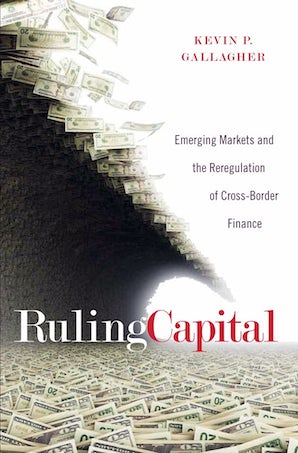 Emerging Markets and the Reregulation of Cross-Border Finance

In Ruling Capital, Kevin P. Gallagher demonstrates how several emerging market and developing countries (EMDs) managed to reregulate cross-border financial flows in the wake of the global financial crisis, despite the political and economic difficulty of doing so at the national level. Gallagher also shows that some EMDs, particularly the BRICS coalition, were able to maintain or expand their sovereignty to regulate cross-border finance under global economic governance institutions. Gallagher combines econometric analysis with in-depth interviews with officials and interest groups in select emerging markets and policymakers at the International Monetary Fund, the World Trade Organization, and the G-20 to explain key characteristics of the global economy. Gallagher develops a theory of countervailing monetary power that shows how emerging markets can counter domestic and international opposition to the regulation of cross-border finance. Although many countries were able to exert countervailing monetary power in the wake of the crisis, such power was not sufficient to stem the magnitude of unstable financial flows that continue to plague the world economy. Drawing on this theory, Gallagher outlines the significant opportunities and obstacles to regulating cross-border finance in the twenty-first century.

"Cross-border portfolio capital flows and their frequent instability have brought new challenges to emerging market countries seeking sustainable economic growth. In this volume, Gallagher (global studies, Boston Univ.) focuses on these dangerous financial flows and what can be done about them. The book is clear, concise, and authoritative, arguing that optimal not minimal intervention in cross-border portfolio capital flows has become an important policy goalhaving even penetrated the International Monetary Fund's toolkit."

"Ruling Capital is a very good book that makes important contributions to the study of global finance. Kevin P. Gallagher's claims that the theory and practice of capital controls have been transformed are compelling and invite engagement."

"In Ruling Capital, Kevin P. Gallagher provides an insightful and powerful economic and political economy analysis of how the case for and practice of cross-border capital account management has strengthened since the global financial crisis. At the same time, he shows in a powerful way how this advance has been constrained by U.S. policy and by the proliferation of Free Trade Agreements and Bilateral Investment Treaties. Ruling Capital is essential reading for scholars and policymakers alike."

Kevin P. Gallagher is Associate Professor in the Frederick S. Pardee School of Global Studies and co-director of the Global Economic Governance Initiative at Boston University. He is the author of The Clash of Globalizations: Essays on the Political Economy of Trade and Development Policy and Free Trade and the Environment: Mexico, NAFTA, and Beyond and coauthor of The Dragon in the Room: China and the Future of Latin American Industrialization and The Enclave Economy: Foreign Investment and Sustainable Development in Mexico’s Silicon Valley.