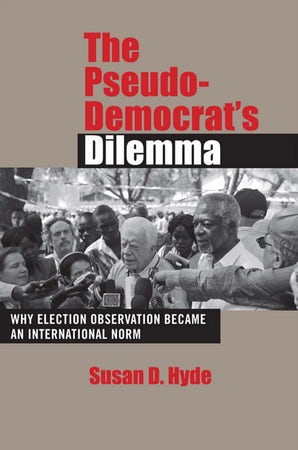 The Pseudo-Democrat's Dilemma is licensed under a Creative Commons Attribution-NonCommercial-NoDerivatives 4.0 International License.

Why did election monitoring become an international norm? Why do pseudo-democrats—undemocratic leaders who present themselves as democratic—invite international observers, even when they are likely to be caught manipulating elections? Is election observation an effective tool of democracy promotion, or is it simply a way to legitimize electoral autocracies? In The Pseudo-Democrat's Dilemma, Susan D. Hyde explains international election monitoring with a new theory of international norm formation. Hyde argues that election observation was initiated by states seeking international support. International benefits tied to democracy give some governments an incentive to signal their commitment to democratization without having to give up power. Invitations to nonpartisan foreigners to monitor elections, and avoiding their criticism, became a widely recognized and imitated signal of a government's purported commitment to democratic elections.Hyde draws on cross-national data on the global spread of election observation between 1960 and 2006, detailed descriptions of the characteristics of countries that do and do not invite observers, and evidence of three ways that election monitoring is costly to pseudo-democrats: micro-level experimental tests from elections in Armenia and Indonesia showing that observers can deter election-day fraud and otherwise improve the quality of elections; illustrative cases demonstrating that international benefits are contingent on democracy in countries like Haiti, Peru, Togo, and Zimbabwe; and qualitative evidence documenting the escalating game of strategic manipulation among pseudo-democrats, international monitors, and pro-democracy forces.

"This book tackles an interesting puzzle: Why would pseudo-democrats invite international election observers and cheat in front of them if getting caught is costly? A norm has developed because of leaders' attempts to signal to the international community their democratic credentials, even if they are not really committed to democracy. Susan D Hyde establishes a strategic tension for pseudo-democrats that is straightforward and compelling, and she provides an impressive array of empirical evidence to support her claims: cross-national time-series data, within-country experimental evidence, and qualitative accounts from hundreds of observer reports. The Pseudo-Democrat’s Dilemma is a must-read for those interested in elections and the development of norms."

"The Pseudo-Democrat's Dilemma offers a brilliant and groundbreaking theory of how, over time, individual strategic state actions unintentionally can generate and diffuse new international norms. With a powerful analytical model, methodological sophistication and careful attention to historical nuance and detail, Susan D. Hyde not only explains the rise of international election monitoring but also offers a compelling general account of why states now accept a host of intrusive external practices that directly violate their sovereignty."

"In The Pseudo-Democrat's Dilemma, Susan D. Hyde investigates the spread of international election observation, even to countries that hold less-than-democratic elections. This spread, Hyde persuasively contends, can only be explained if we understand the very consequential signal sent by incumbent leaders to the international community by allowing their elections to be observed. This book make a major contribution to the study of international election observation and to our understanding of democracy promotion more generally."

"Susan D. Hyde has produced a theoretically elegant and empirically rigorous account of the relatively rapid and nearly universal spread of election monitoring. Her signaling theory of norm diffusion is a novel and important contribution to our understanding of how a new practice can become a global standard, and she tests and elaborate her theory using a variety of methods, including the first-ever randomized field experiments assessing the effects of monitoring. The Pseudo-Democrat's Dilemma is a model for how careful social science can be brought to bear on contemporary policy issues."

"This is a first-rate book. It is well written, well argued, thorough, creative, and, on top of it all, presents a theory about something that is of great practical and theoretical interest. Susan D. Hyde accounts for the rise of the international norm of election monitoring as the result of leaders' desire to signal to the international community their democratic credentials, even if they are not real democrats. The Pseudo-Democrat's Dilemma is an example of truly theoretically informed empirical research, in which the author invokes the best available methods to subject her theory to tests."

Susan D. Hyde is Associate Professor of Political Science and International Affairs at Yale University. She has been on observer missions for organizations in Afghanistan, Albania, Indonesia, Nicaragua, Pakistan, and Venezuela. She is coeditor of Election Fraud: Detecting and Deterring Election Manipulation.

The Pseudo-Democrat's Dilemma is licensed under a Creative Commons Attribution-NonCommercial-NoDerivatives 4.0 International License.