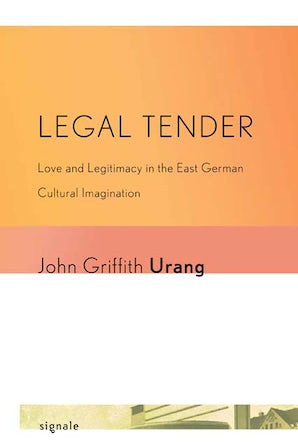 Love and Legitimacy in the East German Cultural Imagination

At first glance, romance seems an improbable angle from which to write a cultural history of the German Democratic Republic. By most accounts the GDR was among the most dour and disciplined of socialist states, so devoted to the rigors of Stalinist aesthetics that the notion of an East German romantic comedy was more likely to generate punch lines than lines at the box office.

But in fact, as John Urang shows in Legal Tender, love was freighted as a privileged site for the negotiation and reorganization of a surprising array of issues in East German public culture between 1949 and 1989. Through close readings of a diverse selection of films and novels from the former GDR, Urang offers an eye-opening account of the ideological stakes of love stories in East German culture. Throughout its forty-year existence the East German state was plagued with an ongoing problem of legitimacy. The love story's unique and unpredictable mix of stabilizing and subversive effects gave it a peculiar status in the cultural sphere.

Urang shows how love stories could mediate the problem of social stratification, providing a language with which to discuss the experience of class antagonism without undermining the Party's legitimacy. But for the Party there was danger in borrowing legitimacy from the romantic plot: the love story's destabilizing influences of desire and drive could just as easily disrupt as reconcile. A unique contribution to German studies, Legal Tender offers remarkable insights into the uses and capacities of romance in modern Western culture.

"John Griffith Urang examines the narrative of love as it appeared in East German popular culture. Since East Germany is largely absent from popular culture in the West, this is a compelling premise on two levels. Firstly, it reminds us that East Germany had a popular culture of its own, in contrast to the gray, undefined impression that we may have of the country; and secondly, it reveals that in that culture there was space for the romantic narratives generally associated with freer expression than that granted under communist rule. Urang's range of examples is admirably broad . . . and his argument, that the romantic discourse was used to negotiate a wide range of issues from within East Germany, including the socialist attitude to labor, and the secret police, is both convincing and compelling. However, his treatment of the individual examples is perhaps the great strength of this book. Particularly fascinating are the magical realist novels of Irmtraud Morgner, whose unfinished Salman trilogy considers multiple permutations of gender and sexuality in a fantastical backdrop, and within the socialist context of the GDR."—Alan Ashton-Smith, PopMatters, 27 October 2010

"Through close readings of a diverse selection of films and novels from the former GDR, Legal Tender offers a broad and detailed account of the fraught history of romantic codes in the East German cultural context. Far from being marginalized, the discourse of romantic love turns out to be a privileged site for the negotiation and reorganization of a surprising array of issues in East German culture between 1949 and 1989. John Griffith Urang impressively combines a general level of analytical discussion of cultural, political and social developments of the forty-year period with original and often sophisticated readings of individual texts. The writing is marked by clarity and fluidity; the underlying argument persuasive throughout."—David Bathrick, Jacob Gould Schurman Emeritus Professor of Theatre, Film and Dance and German Studies, Cornell University

"Legal Tender is among the best general books on GDR literature that I have read in over a decade. John Griffith Urang's highly original and ambitious, but richly substantiated, approach to five decades of GDR literature via the cultural economy of romance enables us to recognize the way in which the production and consumption of love stories relates to the social and political economy of the GDR. The argument is nuanced and consistent, deftly forging a link between an extraordinarily wide range of theoretical and philosophical reflections and an astutely chosen body of literary texts that respond richly to this analytical framework."—Patricia Herminghouse, University of Rochester