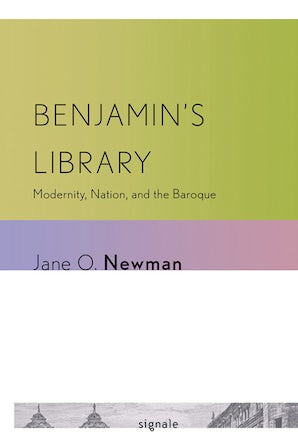 Modernity, Nation, and the Baroque

In Benjamin's Library, Jane O. Newman offers, for the first time in any language, a reading of Walter Benjamin's notoriously opaque work, Origin of the German Tragic Drama that systematically attends to its place in discussions of the Baroque in Benjamin's day. Taking into account the literary and cultural contexts of Benjamin's work, Newman recovers Benjamin’s relationship to the ideologically loaded readings of the literature and political theory of the seventeenth-century Baroque that abounded in Germany during the political and economic crises of the Weimar years.

To date, the significance of the Baroque for Origin of the German Tragic Drama has been glossed over by students of Benjamin, most of whom have neither read it in this context nor engaged with the often incongruous debates about the period that filled both academic and popular texts in the years leading up to and following World War I. Armed with extraordinary historical, bibliographical, philological, and orthographic research, Newman shows the extent to which Benjamin participated in these debates by reconstructing the literal and figurative history of sixteenth- and seventeenth-century books that Benjamin analyzes and the literary, art historical and art theoretical, and political theological discussions of the Baroque with which he was familiar. In so doing, she challenges the exceptionalist, even hagiographic, approaches that have become common in Benjamin studies. The result is a deeply learned book that will infuse much-needed life into the study of one of the most influential thinkers of the twentieth century.

"Jane O. Newman's erudite and eye-opening Benjamin’s Library bores into the Trauerspiel book with sufficient unbending resolve to liberate an understanding of its availability as a uniquely valuable crux in the self-understanding of literary-historical studies as a whole. Newman skillfully traces the citational web of literary scholars and art historians jostling for attention in Benjamin’s account of the baroque, highlighting the untold story of that period’s pivotal importance in the conceptualization of modernity in the late nineteenth and early twentieth centuries. Particularly remarkable is her recognition that a case study of exactly the one book Newman treats would produce such a huge and integrated pattern of implications. This working model of the process of disciplinary self-reflection should be recognized as itself a milestone in that process."—Citation from the 2012 Committee of the Aldo and Jeanne Scaglione Prize for Studies in Germanic Languages and Literatures (Modern Language Association)

"Newman's study offers an astonishingly thorough reconstruction of the Trauerspiel book’s enabling intellectual conditions, paying special attention to the debates in art history, literary history, and theology since the nineteenth century and around World War I. . . . Newman’s provocative study offers an image of Benjamin that runs counter to the accepted version of the writer as the quintessentially cosmopolitan, border-crossing intellectual . . . [and] sets news standards for a return to archival research, historical reconstruction, and philological rigor in Benjamin studies."—Rolf J. Goebel, Monatshefte (Spring 2013)

Jane O. Newman is Professor of Comparative Literature at the University of California, Irvine. She is the author of Pastoral Conventions: Poetry, Language, and Thought in Seventeenth-Century Nuremberg and The Intervention of Philology: Gender, Learning, and Power in Lohenstein's Roman Plays.