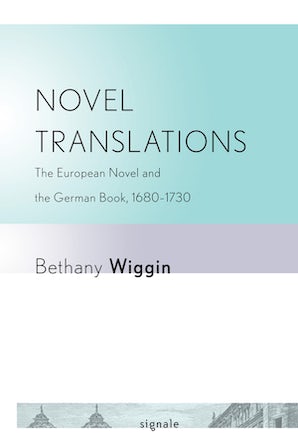 Many early novels were cosmopolitan books, read from London to Leipzig and beyond, available in nearly simultaneous translations into French, English, German, and other European languages. In Novel Translations, Bethany Wiggins charts just one of the paths by which newness—in its avatars as fashion, novelties, and the novel—entered the European world in the decades around 1700. As readers across Europe snapped up novels, they domesticated the genre. Across borders, the novel lent readers everywhere a suggestion of sophistication, a familiarity with circumstances beyond their local ken.

Into the eighteenth century, the modern German novel was not German at all; rather, it was French, as suggested by Germans' usage of the French word Roman to describe a wide variety of genres: pastoral romances, war and travel chronicles, heroic narratives, and courtly fictions. Carried in large part on the coattails of the Huguenot diaspora, these romans, nouvelles, amours secrets, histoires galantes, and histories scandaleuses shaped German literary culture to a previously unrecognized extent. Wiggin contends that this French chapter in the German novel's history began to draw to a close only in the 1720s, more than sixty years after the word first migrated into German. Only gradually did the Roman go native; it remained laden with the baggage from its "French" origins even into the nineteenth century.

"Bethany Wiggin addresses the culture of the novel in Europe in what she argues should be understood as the important transitional period of the late seventeenth and early eighteenth centuries. Though she focuses primarily on German-language works, Wiggin intervenes in histories of the novel told merely as narratives of nation, working comparatively across the German-language, French, and English traditions. Deeply engaged with contemporary debates about translation and transnationalism, globalism and world literature, print culture and gender, Wiggin puts pressure on both period and genre categories in innovative ways. Novel Translations will encourage scholars in a number of fields to take a second look at the intersection of several European cultures in these neglected years."—Jane O. Newman, University of California, Irvine

"This book is an excellent and welcome addition to the discussion of the early modern evolution of the novel in general and of the European influences on the German novel, in particular. Wiggin approaches this traditional field in a new and exciting way by presenting fresh information that leads her to stimulating and original interpretations on the basis of a well-synthesized review of current and past critical literature. Her book impresses with its broad disciplinary reach within the context of early modern German studies as it addresses the seasoned scholars with new ideas and approaches graduate students with interpretations and explorations of a variety of narratives, inviting them to engage with a literature quite distant from their accustomed reading experiences."—Gerhild S. Williams, Associate Vice Chancellor and Barbara Schaps Thomas & David M. Thomas Professor in the Humanities, Washington University in St. Louis