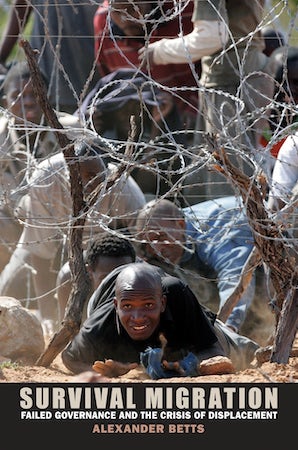 Failed Governance and the Crisis of Displacement

International treaties, conventions, and organizations to protect refugees were established in the aftermath of World War II to protect people escaping targeted persecution by their own governments. However, the nature of cross-border displacement has transformed dramatically since then. Such threats as environmental change, food insecurity, and generalized violence force massive numbers of people to flee states that are unable or unwilling to ensure their basic rights, as do conditions in failed and fragile states that make possible human rights deprivations. Because these reasons do not meet the legal understanding of persecution, the victims of these circumstances are not usually recognized as "refugees," preventing current institutions from ensuring their protection.In this book, Alexander Betts develops the concept of "survival migration" to highlight the crisis in which these people find themselves. Examining flight from three of the most fragile states in Africa—Zimbabwe, the Democratic Republic of Congo, and Somalia—Betts explains variation in institutional responses across the neighboring host states. There is massive inconsistency. Some survival migrants are offered asylum as refugees; others are rounded up, detained, and deported, often in brutal conditions. The inadequacies of the current refugee regime are a disaster for human rights and gravely threaten international security. In Survival Migration, Betts outlines these failings, illustrates the enormous human suffering that results, and argues strongly for an expansion of protected categories.

"Overall, due to its inter-disciplinarity, the author's clear writing style, and a balancedassessment of competing and relevant perspectives, Survival Migration: FailedGovernance and the Crisis of Displacement is convincing as well as very accessible to adiverse readership."

"This book is a brilliant and valuable contribution to international norm and refugee literature. It should most certainly be closely studied not only by humanitarian practitioners, but by all students of international relations and global governance."

"Survival Migration is a study of how the international community treats some of its most vulnerable: persons fleeing for their lives from Somalia, Zimbabwe, and the Democratic Republic of Congo. It is a passionate book disciplined by carefully collected evidence. It is also a powerful argument that global regimes, including the protection of desperate migrants, are implemented or not according to the preferences of national governments. There are important lessons here for the study of global governance and the protection of persons most in need."

"Survival Migration is a very thoughtful and thought-provoking book providing critical guidance on how to enhance a refugee regime under attack. Alexander Betts makes a convincing case for prioritizing a focus on better implementation and stronger domestic institutions rather than new international law to address new causes of flight."

"In this well-written book, Alexander Betts makes a convincing argument about the pressures on people who flee serious human rights deprivations but do not have official refugee status. Survival Migration has a strong conceptual framework that is amply illustrated with interesting case studies. Its compelling empirical evidence will be valuable to researchers in a number of fields."

Alexander Betts is University Lecturer at the University of Oxford. He is the author of Protection by Persuasion: International Cooperation in the Refugee Regime, Survival Migration: Failed Governance and the Crisis of Displacement (both from Cornell), and Forced Migration and Global Politics, coauthor of UNHCR: The Politics and Practice of Refugee Protection, editor of Global Migration Governance, and coeditor of Refugees in International Relations.