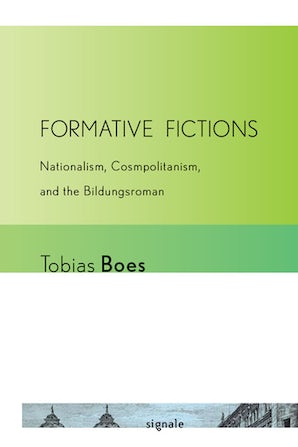 Nationalism, Cosmopolitanism, and the Bildungsroman

The Bildungsroman, or "novel of formation," has long led a paradoxical life within literary studies, having been construed both as a peculiarly German genre, a marker of that country's cultural difference from Western Europe, and as a universal expression of modernity. In Formative Fictions, Tobias Boes argues that the dual status of the Bildungsroman renders this novelistic form an elegant way to negotiate the diverging critical discourses surrounding national and world literature.

Since the late eighteenth century, authors have employed the story of a protagonist's journey into maturity as a powerful tool with which to facilitate the creation of national communities among their readers. Such attempts always stumble over what Boes calls "cosmopolitan remainders," identity claims that resist nationalism's aim for closure in the normative regime of the nation-state. These cosmopolitan remainders are responsible for the curiously hesitant endings of so many novels of formation.

In Formative Fictions, Boes presents readings of a number of novels—Goethe’s Wilhelm Meister’s Apprenticeship, Karl Leberecht Immermann’s The Epigones, Gustav Freytag’s Debit and Credit, Alfred Döblin’s Berlin Alexanderplatz, and Thomas Mann’s Doctor Faustus among them—that have always been felt to be particularly "German" and compares them with novels by such authors as George Eliot and James Joyce to show that what seem to be markers of national particularity can productively be read as topics of world literature.

"By reinserting less well-studied German examples into a history of the genre, Boes resists turning plots into theoretical self-descriptions. His approach allows the genre the freedom of its individual solutions.... Boes remains true to the incipient insight that he has unearthed in Morgenstern."

"...Boes handles many and difficult relevant bodies of thought, both historical and theoretical... with exemplary clarity, writing in fluent and precise academic prose free of unnecessary jargon. What is more, he situates his work as a whole lucidly and creatively between the disciplines of German Studies and comparative literature, thereby enriching both of them and striking a blow for the ability of literary study to refresh itself at a time when the humanities are in sore need of the kind of inventiveness and confidence in them that Boes displays."

"Formative Fictions should appeal to multiple academic audiences. Anyone interested in the genre of the Bildungsroman will want to read Tobias Boes's work. What elevates the book above individual genre studies, however, is its effort to redefine comparative literature as world literature. Boes does this in a very careful way, steering between the Scylla of nationalist essentialism and the Charybdis of an empty universalism. That is, he recognizes the importance of national and linguistic difference, but demonstrates how the national is caught between the global and the local, how the cosmopolitan can coincide with the national, and how the novels express the 'synchronicity of the non-synchronous' in the societies from which they emerged."

"In Formative Fictions Tobias Boes seeks a new perspective on the perennial topic of the Bildungsroman, to relieve it of its traditional understanding as a national form, sometimes regarded as peculiar to Germany. Boes places the form in a context of increasing historical awareness and finds cosmopolitan sensibilities between nationalism and individualism that, drawing on Homi Bhabha's 'vernacular cosmopolitanism,’ allow comparisons of texts across literatures."

Tobias Boes is Assistant Professor of German at the University of Notre Dame.