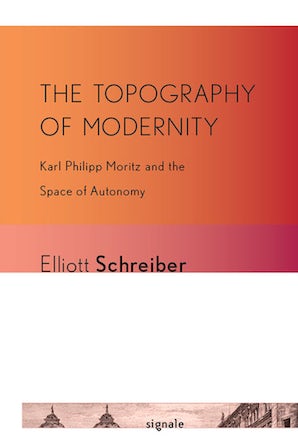 The Topography of Modernity is licensed under a Creative Commons Attribution-NonCommercial-NoDerivatives 4.0 International License.

The Topography of Modernity

Karl Philipp Moritz and the Space of Autonomy

Karl Philipp Moritz (d. 1793) was one of the most innovative writers of the late Enlightenment in Germany. A novelist, travel writer, editor, and teacher he is probably best known today for his autobiographical novel Anton Reiser (1785–90) and for his treatises on aesthetics, foremost among them Über die bildende Nachahmung des Schönen (On the Formative Imitation of the Beautiful), published in 1788. In this treatise, Moritz develops the concept of aesthetic autonomy, which became widely known after Goethe included a lengthy excerpt of it in his own Italian Journey (1816–17). It was one of the foundational texts of Weimar classicism, and it became pivotal for the development of early Romanticism.

In The Topography of Modernity, Elliott Schreiber gives Moritz the credit he deserves as an important thinker beyond his contributions to aesthetic theory. Indeed, he sees Moritz as an incisive early observer and theorist of modernity. Considering a wide range of Moritz's work including his novels, his writings on mythology, prosody, and pedagogy, and his political philosophy and psychology, Schreiber shows how Moritz's thinking developed in response to the intellectual climate of the Enlightenment and paved the way for later social theorists to conceive of modern society as differentiated into multiple, competing value spheres.

The Topography of Modernity is licensed under a Creative Commons Attribution-NonCommercial-NoDerivatives 4.0 International License.