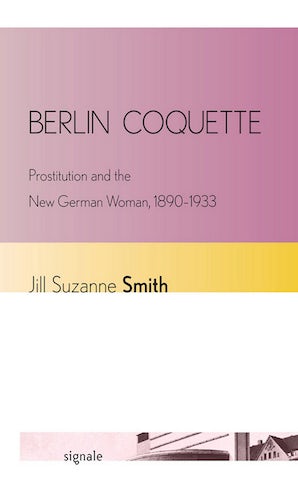 During the late nineteenth century the city of Berlin developed such a reputation for lawlessness and sexual licentiousness that it came to be known as the "Whore of Babylon." Out of this reputation for debauchery grew an unusually rich discourse around prostitution. In Berlin Coquette, Jill Suzanne Smith shows how this discourse transcended the usual clichés about prostitutes and actually explored complex visions of alternative moralities or sexual countercultures including the “New Morality” articulated by feminist radicals, lesbian love, and the “New Woman.”

Combining extensive archival research with close readings of a broad spectrum of texts and images from the late Wilhelmine and Weimar periods, Smith recovers a surprising array of productive discussions about extramarital sexuality, women's financial autonomy, and respectability. She highlights in particular the figure of the cocotte (Kokotte), a specific type of prostitute who capitalized on the illusion of respectable or upstanding womanhood and therefore confounded easy categorization. By exploring the semantic connections between the figure of the cocotte and the act of flirtation (of being coquette), Smith’s work presents flirtation as a type of social interaction through which both prostitutes and non-prostitutes in Imperial and Weimar Berlin could express extramarital sexual desire and agency.

"[Berlin Coquette] is well written—an ever-rarer feature of academic writing, it seems—and well researched (Smith's footnotes are especially impressive). . . . This is an important contribution to a variety of fields (German studies, gender studies, history, urban studies, and theater/film studies come immediately to mind) and certainly one that will change the way we understand prostitution."—Tyler Carrington, H-Net Reviews (November 2014)

"Berlin Coquette is an innovative interdisciplinary work that succeeds in illustrating the complicated nature of the urban German prostitution trade in the years before and after World War I. . . .With the intent of moving beyond the standard dichotomy of victim/villain, Smith uses myriad sources to sketch a vibrant picture of women in Berlin's sex trade from the Kaiserreich to the end of the Weimar Republic."—Lisa M. Todd,The Journal of Interdisciplinary History(Summer 2015)

"Berlin Coquette does something still surprisingly original in the history of Imperial and Weimar Germany: It focuses on prostitution as a singular theme. Jill Suzanne Smith provides a highly nuanced and sophisticated argument about the troubling victim-agent dichotomy of prostitution, and she is respectful of both her historical and her contemporary counterparts. She eschews simplifications and stereotypes and contextualizes a specific type of prostitution (and a specific cultural response to it) in the rapidly industrializing metropolis that Berlin became in the late nineteenth and early twentieth centuries."—Annette F. Timm, University of Calgary, author of The Politics of Fertility in Twentieth-Century Berlin

"The important contribution of Berlin Coquette lies in bringing together various perspectives (critical debates, social movements, literary representations) and in emphasizing the continuities between Wilhelmine and Weimar culture. Mixing cultural and intellectual history, Jill Suzanne Smith tracks the mobilization of the figure of the prostitute—as social phenomenon, cultural icon, and critical metaphor—in a variety of literary, political, and social discourses. The focus throughout is on the uses and abuses of this overdetermined figure in addressing the (largely urban) effects of industrialization, modernization, and women's emancipation."—Sabine Hake, The University of Texas at Austin, author of Screen Nazis: Cinema, History, and Democracy