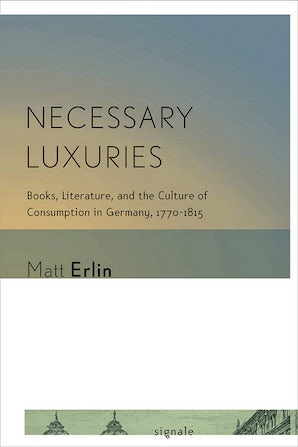 Books, Literature, and the Culture of Consumption in Germany, 1770–1815

The consumer revolution of the eighteenth century brought new and exotic commodities to Europe from abroad—coffee, tea, spices, and new textiles to name a few. Yet one of the most widely distributed luxury commodities in the period was not new at all, and was produced locally: the book. In Necessary Luxuries, Matt Erlin considers books and the culture around books during this period, focusing specifically on Germany where literature, and the fine arts in general, were the subject of soul-searching debates over the legitimacy of luxury in the modern world.Building on recent work done in the fields of consumption studies as well as the New Economic Criticism, Erlin combines intellectual-historical chapters (on luxury as a concept, luxury editions, and concerns about addictive reading) with contextualized close readings of novels by Campe, Wieland, Moritz, Novalis, and Goethe. As he demonstrates, artists in this period were deeply concerned with their status as luxury producers. The rhetorical strategies they developed to justify their activities evolved in dialogue with more general discussions regarding new forms of discretionary consumption. By emphasizing the fragile legitimacy of the fine arts in the period, Necessary Luxuries offers a fresh perspective on the broader trajectory of German literature in the late eighteenth and early nineteenth century, recasting the entire period in terms of a dynamic unity, rather than simply as a series of literary trends and countertrends.

"Necessary Luxuries is one of the finest books I have read on eighteenth-century German literature. Matt Erlin brings together three sources; canonical eighteenth-century novels are contextualized within the century's vociferous discussion of luxury consumption and this text-context relation is then examined through the range of late twentieth-century scholarship on consumer culture generally. The author is thorough and well read; not only does he include all the sources one would expect from a scholar, he integrates them astutely, so that at no point does the reader feel that postindustrial social theory is being imposed upon proto-capitalist literature."

"In Necessary Luxuries, Matt Erlin tells the story of the ways in which German literature of the late eighteenth and early nineteenth centuries—in particular the novel as literary genre—reflects, at the level of plot and fictional world, on the parameters and consequences of emergent consumer culture, and simultaneously, at the level of form and structure, struggles to come to terms with its own status as 'luxury' good. Erlin argues that it is not enough to view the discourse of aesthetic autonomy as a reaction against the commercialization and commodification of the arts; nor is it sufficient, in his view, to examine the refashioning of literature in this period as a purely self-reflexive, literature-internal development. By recontextualizing this self-transformation of literature in the discursive field of debates about commodities and luxuries more generally, Erlin ties these developments back into a relevant sociocultural and intellectual context—a context, moreover, that transcends the more limiting confines of German-speaking Europe and extends at least to France and England."

Matt Erlin is Professor and Chair, Department of Germanic Languages and Literatures, at Washington University in St. Louis. He is the author of Berlin's Forgotten Future: City, History and Enlightenment in Eighteenth-Century Germany and coeditor of Distant Readings: Topographies of German Culture in the Long Nineteenth Century and German Culture in Nineteenth-Century America: Reception, Adaptation, Transformation.