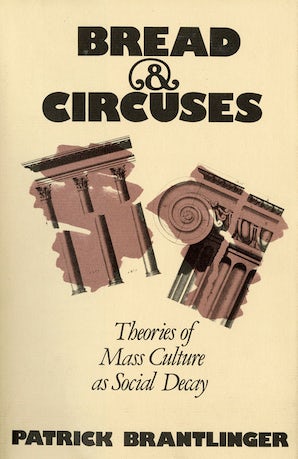 Bread and Circuses is licensed under a Creative Commons Attribution-NonCommercial-NoDerivatives 4.0 International License.

Lively and well written, Bread and Circuses analyzes theories that have treated mass culture as either a symptom or a cause of social decadence. Discussing many of the most influential and representative theories of mass culture, it ranges widely from Greek and Roman origins, through Marx, Nietzsche, Freud, Ortega y Gasset, T. S. Eliot, and the theorists of the Frankfurt Institute, down to Marshall McLuhan and Daniel Bell. Brantlinger considers the many versions of negative classicism and shows how the belief in the historical inevitability of social decay—a belief today perpetuated by the mass media themselves—has become the dominant view of mass culture in our time. While not defending mass culture in its present form, Brantlinger argues that the view of culture implicit in negative classicism obscures the question of how the media can best be used to help achieve freedom and enlightenment on a truly democratic basis.

Patrick Brantlinger is Professor of English and Cultural Studies at Indiana University. He is the author of many published works including Fictions of State: Culture and Credit in Britain, 1694-1994, Bread and Circuses: Theories of Mass Cultures as Social Decay and Rule of Darkness: British Literature and Imperialism, all from Cornell.

Bread and Circuses is licensed under a Creative Commons Attribution-NonCommercial-NoDerivatives 4.0 International License.