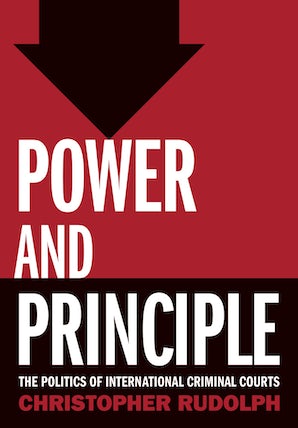 Power and Principle is licensed under a Creative Commons Attribution-NonCommercial-NoDerivatives 4.0 International License.

The Politics of International Criminal Courts

On August 21, 2013, chemical weapons were unleashed on the civilian population in Syria, killing another 1,400 people in a civil war that had already claimed the lives of more than 140,000. As is all too often the case, the innocent found themselves victims of a violent struggle for political power. Such events are why human rights activists have long pressed for institutions such as the International Criminal Court (ICC) to investigate and prosecute some of the world's most severe crimes: genocide, war crimes, and crimes against humanity.While proponents extol the creation of the ICC as a transformative victory for principles of international humanitarian law, critics have often characterized it as either irrelevant or dangerous in a world dominated by power politics. Christopher Rudolph argues in Power and Principle that both perspectives are extreme. In contrast to prevailing scholarship, he shows how the interplay between power politics and international humanitarian law have shaped the institutional development of international criminal courts from Nuremberg to the ICC. Rudolph identifies the factors that drove the creation of international criminal courts, explains the politics behind their institutional design, and investigates the behavior of the ICC. Through the development and empirical testing of several theoretical frameworks, Power and Principle helps us better understand the factors that resulted in the emergence of international criminal courts and helps us determine the broader implications of their presence in society.

"Rudolph challenges the assumption that states' interests are obstructive to the institutionalization of international criminal justice, and shows how principles and power are independent.... The book's research design makes the theory and empirical evidence accessible and useful to a broad range of scholars."

"This excellent study makes an invaluable contribution to the literature on international organizations.... The book has an excellent review of the literature explaining the creation of the [International Criminal Court], and it examines the role of interests defined in terms of power in shaping its institutional design.... A pathbreaking volume."

"Christopher Rudolph masterfully demonstrates how the interplay between power and principle shapes the design and operation of the international criminal justice system. The book has important implications for scholars as well as practitioners interested in how the International Criminal Court can function in a world where it constantly has to balance ideals with more pragmatic considerations."

"Finally, a pragmatic and compelling take on the formation and operation of the much-lauded—and much-criticized—International Criminal Court that demonstrates how power and political interest have played a central role alongside principles of global justice."

"In Power and Principle, Christopher Rudolph offers an original interpretation of the International Criminal Court in which he argues that the creation, design, and implementation of the court should be understood not only in terms of the principles it embodies but also in terms of the systemic interests of states. Rudolph makes the valuable point that states create and work within international institutions in ways that they see as advancing their power, prerogatives, and control over institutional processes and outcomes. Power and Principle will enrich the thinking of students and scholars of the International Criminal Court and of international institutions more broadly."

"Rudolph's book is a welcome contribution to the body of literature that has left the partisan debates about constructivism versus rationalism behind and instead focuses on the exploration of their concrete interaction in producing observable outcomes."

Christopher Rudolph is Associate Professor of International Relations at American University. He is the author of National Security and Immigration: Explaining Policy Development in Europe and North American since 1945.

Power and Principle is licensed under a Creative Commons Attribution-NonCommercial-NoDerivatives 4.0 International License.