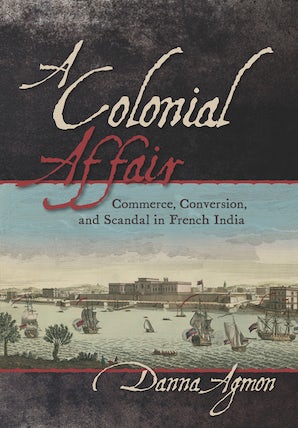 A Colonial Affair is licensed under a Creative Commons Attribution-NonCommercial-NoDerivatives 4.0 International License.

A Colonial Affair traces the 1716 conviction of Nayiniyappa, a Tamil commercial agent employed by the French East India Company, for tyranny and sedition, and his subsequent public torture, the loss of his wealth, the exile of his family, and his ultimate exoneration. Danna Agmon’s gripping microhistory is a vivid guide to the "Nayiniyappa Affair" in the French colony of Pondicherry, India. The surprising and shifting fates of Nayiniyappa and his family form the basis of this story of global mobilization, which is replete with merchants, missionaries, local brokers, government administrators, and even the French royal family.

Agmon’s compelling account draws readers into the social, economic, religious, and political interactions that defined the European colonial experience in India and elsewhere. Her portrayal of imperial sovereignty in France’s colonies as it played out in the life of one beleaguered family allows readers to witness interactions between colonial officials and locals. Students and scholars of the history of colonialism, religion, capitalism, and law will find Agmon’s narrative of European imperialism of great interest.

"Compellingly argued and beautifully written. Engaging scholarship always inspires new questions, and A Colonial Affair will make a valuable addition to the bookshelf of anyone interested in the histories of early modern France, colonial India, or the contradiction-laden dynamics of empires more generally."

"One might not think of mission history or historical analysis as gripping. However, because Agmon has carefully, cogently, and insightfully analyzed the events and significance of Nayiniyappa's trial, readers might find themselves impelled to read A Colonial Affair from cover to cover at one sitting!"

"A Colonial Affair is a compelling illustration of the ways in which insights from other disciplines, in this case anthropology, can deepen our understanding of the nature and dynamics of the social, economic, political, and other interactions that were an integral component of the colonial experience in India and elsewhere."

"A Colonial Affair is highly readable and just the perfect length for a course book. It will generate fruitful discussions not just of substance, such as the respective natures of colonies and empires, but also of method. We can learn a great deal by parsing a single ‘scandal’ from a variety of angles."

"This smart, nuanced, and well-researched investigation reveals the role of powerful Tamil brokers within the fractious commercial and spiritual enterprise of French India. Danna Agmon foregrounds the role of indigenous brokers in French attempts to establish their Indian Ocean trading base. A lively microhistory founded in legal records, A Colonial Affair animates and analyzes the larger problem of imperial authority in an intricate and often overlooked corner of empire. An informative and engaging read!"

- Sue Peabody, author of "There Are No Slaves in France", Meyer Distinguished Professor, Washington State University

"Danna Agmon's dazzling study of French India at the turn of the eighteenth century highlights facets of the encounter between Europe and India that we have often missed. It suggests the possibilities of a different kind of colonialism to that which eventuated under the English. It also tells a rattling good yarn."

"Far from being a mere account of one man's misfortune, the narrative presents multivalent and layered meanings that deepen the reader's understanding of the establishment of French sovereignty in colonial India.... Agmon's prose is sophisticated, clear and flowing, and she successfully guides the reader through all of the affair's complexities."

Danna Agmon is Assistant Professor of History and ASPECT at Virginia Tech.

A Colonial Affair is licensed under a Creative Commons Attribution-NonCommercial-NoDerivatives 4.0 International License.