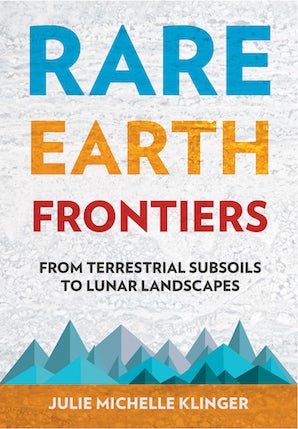 From Terrestrial Subsoils to Lunar Landscapes

Rare Earth Frontiers is a work of human geography that serves to demystify the powerful elements that make possible the miniaturization of electronics, green energy and medical technologies, and essential telecommunications and defense systems. Julie Michelle Klinger draws attention to the fact that the rare earths we rely on most are as common as copper or lead, and this means the implications of their extraction are global. Klinger excavates the rich historical origins and ongoing ramifications of the quest to mine rare earths in ever more impossible places.

Klinger writes about the devastating damage to lives and the environment caused by the exploitation of rare earths. She demonstrates in human terms how scarcity myths have been conscripted into diverse geopolitical campaigns that use rare earth mining as a pretext to capture spaces that have historically fallen beyond the grasp of centralized power. These include legally and logistically forbidding locations in the Amazon, Greenland, and Afghanistan, and on the Moon. Drawing on ethnographic, archival, and interview data gathered in local languages and offering possible solutions to the problems it documents, this book examines the production of the rare earth frontier as a place, a concept, and a zone of contestation, sacrifice, and transformation.

"Rare Earth Frontiers is a timely text. As Klinger notes, rare earths are neither rare nor technically earths, but they are still widely believed to be both. Although her approach focuses on the human, or cultural, geography of rare earths mining, she does not ignore the geological occurrence of these mineral types, both on Earth and on the moon.... This volume is excellently organized, insightfully written, and extensively sourced."

"Rare Earth Frontiers could easily become the go-to reference for policymakers concerned with the global politics of rare earths. I could envision this book being adopted in courses offered in the disciplines of material science, political science, economics, political anthropology, geography, and sociology. I very much became engrossed in the fieldwork stories, which helped to put a human face on this topic."

Julie Michelle Klinger is Assistant Professor of International Relations and Faculty Fellow at the Global Economic Governance Initiative, Frederick S. Pardee School of Global Studies, Boston University. She is the author of Rare Earth Frontiers: From Terrestrial Subsoils to Lunar Landscapes, from Cornell.