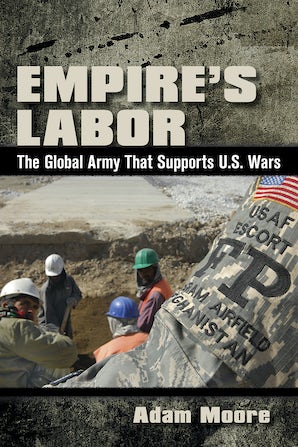 In a dramatic unveiling of the little-known world of contracted military logistics, Adam Moore examines the lives of the global army of laborers who support US overseas wars. Empire's Labor brings us the experience of the hundreds of thousands of men and women who perform jobs such as truck drivers and administrative assistants at bases located in warzones in the Middle East and Africa. He highlights the changes the US military has undergone since the Vietnam War, when the ratio of contractors to uniformed personnel was roughly 1:6. In Afghanistan it has been as high as 4:1. This growth in logistics contracting represents a fundamental change in how the US fights wars, with the military now dependent on a huge pool of contractors recruited from around the world. It also, Moore demonstrates, has social, economic, and political implications that extend well beyond the battlefields.

Focusing on workers from the Philippines and Bosnia, two major sources of "third country national" (TCN) military labor, Moore explains the rise of large-scale logistics outsourcing since the end of the Cold War; describes the networks, infrastructures, and practices that span the spaces through which people, information, and goods circulate; and reveals the experiences of foreign workers, from the hidden dynamics of labor activism on bases, to the economic and social impacts these jobs have on their families and the communities they hail from. Through his extensive fieldwork and interviews, Moore gives voice to the agency and aspirations of the many thousands of foreigners who labor for the US military.

Thanks to generous funding from UCLA and its participation in TOME (Toward an Open Monograph Ecosystem), the ebook editions of this book are available as Open Access volumes from Cornell Open (cornellopen.org) and other repositories.

"Adam Moore has undertaken detailed research, including interviews with workers, to explore the labor force buttressing the U.S. military. He traces patterns of recruitment, finds evidence of exploitative and discriminatory labor practices, and explores how the military's recruitment of legions of workers affects their countries of origin."

Adam Moore is Associate Professor in the Department of Geography at the University of California, Los Angeles. He is author of Peacebuilding in Practice. Follow him on Twitter @ConflictGeo.