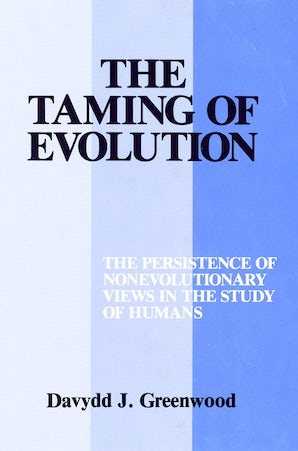 The Taming of Evolution is licensed under a Creative Commons Attribution-NonCommercial-NoDerivatives 4.0 International License.

The Taming of Evolution

The Persistence of Nonevolutionary Views in the Study of Humans

The theory of evolution has clearly altered our views of the biological world, but in the study of human beings, evolutionary and preevolutionary views continue to coexist in a state of perpetual tension. The Taming of Evolution addresses the questions of how and why this is so. Davydd Greenwood offers a sustained critique of the nature/nurture debate, revealing the complexity of the relationship between science and ideology. He maintains that popular contemporary theories, most notably E. O. Wilson’s human sociobiology and Marvin Harris’s cultural materialism, represent pre-Darwinian notions overlaid by elaborate evolutionary terminology. Greenwood first details the humoral-environmental and Great Chain of Being theories that dominated Western thinking before Darwin. He systematically compares these ideas with those later influenced by Darwin’s theories, illuminating the surprising continuities between them. Greenwood suggests that it would be neither difficult nor socially dangerous to develop a genuinely evolutionary understanding of human beings, so long as we realized that we could not derive political and moral standards from the study of biological processes.

Davydd J. Greenwood is Goldwin Smith Professor Emeritus of Anthropology at Cornell University. He is the author of Introduction to Action Research: Social Research for Social Change.

The Taming of Evolution is licensed under a Creative Commons Attribution-NonCommercial-NoDerivatives 4.0 International License.