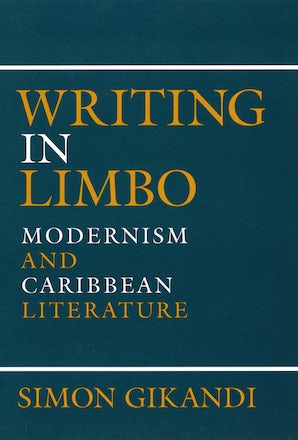 Writing in Limbo is licensed under a Creative Commons Attribution-NonCommercial-NoDerivatives 4.0 International License.

In Simon Gikandi’s view, Caribbean literature and postcolonial literature more generally negotiate an uneasy relationship with the concepts of modernism and modernity—a relationship in which the Caribbean writer, unable to escape a history encoded by Europe, accepts the challenge of rewriting it. Drawing on contemporary deconstructionist theory, Gikandi looks at how such Caribbean writers as George Lamming, Samuel Selvon, Alejo Carpentier, C. L. R. James, Paule Marshall, Merle Hodge, Zee Edgell, and Michelle Cliff have attempted to confront European modernism.

"Gikandi’s pursuit of his broader conception of ‘Caribbean modernism’ pays ample dividends in the space it gives him to read the novels with something like the detailed attention they all deserve but rarely enjoy. Writing in Limbo takes the fiction of the Caribbean seriously and helps integrate its study into a wider American problematic. This is a powerfully argued book written in a limpid style. It marks its terrain with great assurance and conducts its textual analyses with a fine attention to detail. Writing in Limbo is the best book on its topic and a significant advance in the criticism of Caribbean literature."

Simon Gikandi is Robert Schirmer Professor of English at Princeton University and editor of PMLA. He is the author of Slavery and the Culture of Taste (winner of the Susanne M. Glasscock Humanities Book Prize and cowinner of the Melville J. Herskovits Award and the James Russell Lowell Prize) and Maps of Englishness: Writing Identity in the Culture of Colonialism.

Writing in Limbo is licensed under a Creative Commons Attribution-NonCommercial-NoDerivatives 4.0 International License.