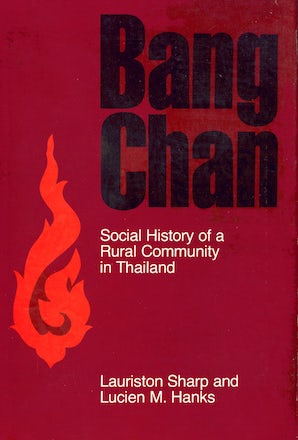 Social History of a Rural Community in Thailand

Bang Chan traces the changing cultural characteristics of a small Siamese village during the century and a quarter from its founding as a wilderness settlement outside Bangkok to its absorption into the urban spread of the Thai capital. Rich in ethnographic detail, the book sums up the major findings of a pioneering interdisciplinary research project that began in 1948. Changes in Bang Chan's social organization, technology, economy, governance, education, and religion are portrayed in the context of local and national developments.

"Bang Chan is a delight to read. The authors have a good narrative style and an eye for detail—not just detail to exemplify but detail to humanize their characters, to relate Bang Chan to the wider world. What a pleasure it is to follow these two guides along the route from Bangkok to Bang Chan, along that rural community’s busy canals, and back again to the big city. Our authors know how to make the trip an absorbing, entertaining, and easy one, no small feat when the journey is scholarly as well."

The late Lauriston Sharp (1907–1993) was Goldwin Smith Professor of Anthropology and Asian Studies at Cornell University. He was the author of Steel Axes for Stone-Age Australians, People Without Politics, and Cultural Continuities and Discontinuities in Southeast Asia and coauthor of Siamese Rice Village. The late Lucien M. Hanks (1910–1988) was Professor of Psychology and Anthropology at Bennington College. He was coauthor of Rice and Man: Agricultural Ecology in Southeast Asia and Tribes of the North Thailand Frontier.