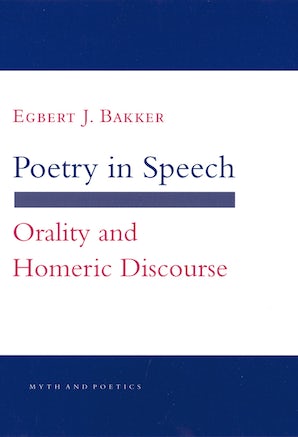 Poetry in Speech is licensed under a Creative Commons Attribution-NonCommercial-NoDerivatives 4.0 International License.

Applying linguistic theory to the study of Homeric style, Egbert J. Bakker offers a highly innovative approach to oral poetry, particularly the poetry of Homer. By situating formulas and other features of oral style within the wider contexts of spoken language and communication, he moves the study of oral poetry beyond the landmark work of Milman Parry and Albert Lord.

One of the book's central features, related to the research of the linguist Wallace Chafe, is Bakker's conception of spoken discourse as a sequence of short speech units reflecting the flow of speech through the consciousness of the speaker. Bakker shows that such short speech units are present in Homeric poetry, with significant consequences for Homeric metrics and poetics. Considering Homeric discourse as a speech process rather than as the finished product associated with written discourse, Bakker's book offers a new perspective on Homer as well as on other archaic Greek texts. Here Homeric discourse appears as speech in its own right, and is freed, Bakker suggests, from the bias of modern writing style which too easily views Homeric discourse as archaic, implicitly taking the style of classical period texts as the norm.

Bakker's perspective reaches beyond syntax and stylistics into the very heart of Homeric—and, ultimately, oral—poetics, altering the status of key features such as meter and formula, rethinking their relevance to the performance of Homeric poetry, and leading to surprising insights into the relation between "speech" and "text" in the encounter of the Homeric tradition with writing.

"Bakker insists that oral poetry be understood not in contrast to written poetry, but as one manifestation of oral speech-activity among many; the Illiad and Poetry in Speech were composed by a poet trained in oral performance. Bakker calls attention to an impressive array of parallels between Homeric and ordinary spoken language. Parts 2 and 3 of this book have taught me a great deal, even after half a century of familiarity with Homeric verse, and are certain to sharpen appreciation of Homer’s style for most other readers, whether oralist or scripsist, adept or tyro."

Egbert J. Bakker is Professor of Classics at Yale University. He is the author of many books, including Pointing at the Past: From Formula to Performance in Homeric Poetics and The Meaning of Meat and the Structure of the Odyssey.

Poetry in Speech is licensed under a Creative Commons Attribution-NonCommercial-NoDerivatives 4.0 International License.