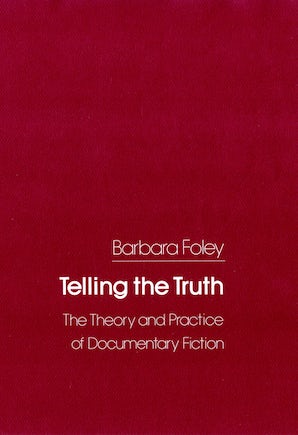 Telling the Truth is licensed under a Creative Commons Attribution-NonCommercial-NoDerivatives 4.0 International License.

The Theory and Practice of Documentary Fiction

Barbara Foley here focuses on the relatively neglected genre of documentary fiction: novels that are continually near the borderline between factual and fictive discourse. She links the development of the genre over three centuries to the evolution of capitalism, but her analyses of literary texts depart significantly from those of most current Marxist critics. Foley maintains that Marxist theory has yet to produce a satisfactory theory of mimesis or of the development of genres, and she addresses such key issues as the problem of reference and the nature of generic distinctions. Among the authors whom Foley treats are Defoe, Scott, George Eliot, Joyce, Isherwood, Dos Passos, William Wells Brown, Ishmael Reed, and Ernest Gaines.

"This ambitious book’s great merit is its stubborn insistence that literary criticism must be explicit in both its theoretical and political assumptions, a belief that makes Telling the Truth stimulating reading for anyone willing to grant Foley’s tightly argued response to contemporary theories of genre, mimesis, and ideology the close attention it deserves. Telling the Truth is a challenging, thought-provoking book, one that should be read by specialists in the novel and by anyone interested in how contemporary critical and social theory can help us recognize literature and literary criticism as the political practices they have always been."

Barbara Foley is a Distinguished Professor of English and American Studies at Rutgers University–Newark. She is the author of Radical Representations: Politics and Form in U.S. Proletarian Fiction, 1929–1941, Spectres of 1919: Class and Nation in the Making of the New Negro, Wrestling with the Left: the Making of Ralph Ellison’s Invisible Man, and Jean Toomer: Race, Repression, and Revolution.

Telling the Truth is licensed under a Creative Commons Attribution-NonCommercial-NoDerivatives 4.0 International License.