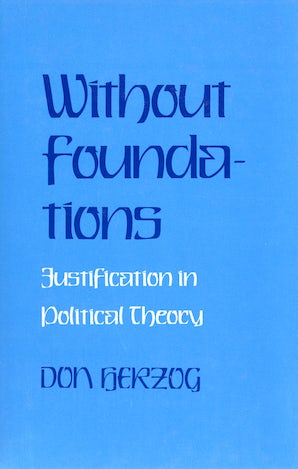 Without Foundations is licensed under a Creative Commons Attribution-NonCommercial-NoDerivatives 4.0 International License.

Can political theorists justify their ideas? Do sound political theories need foundations? What constitutes a well-justified argument in political discourse? Don Herzog attempts to answer these questions by investigating the ways in which major theorists in the Anglo-American political tradition have justified their views. Making use of a wide range of primary texts, Herzog examines the work of such important theorists as Thomas Hobbes, John Locke, the utilitarians (Jeremy Bentham, J. S. Mill. Henry Sidgwick, J. C. Harsanyi, R. M. Hare, and R. B. Brandt), David Hume, and Adam Smith. Herzog argues that Hobbes, Locke, and the utilitarians fail to justify their theories because they try to ground the volatile world of politics in immutable aspects of human nature, language, theology, or rationality. Herzog concludes that the works of Adam Smith and David Hume offer illuminating examples of successful justifications. Basing their political conclusions on social contexts, not on abstract principles, Hume and Smith develop creative solutions to given problems.

Don Herzog is the Edson R. Sunderland Professor of Law at the University of Michigan. He is the author of Household Politics: Conflict in Early Modern England, Cunning, Poisoning the Minds of the Lower Orders, and Happy Slaves: A Critique of Consent Theory.

Without Foundations is licensed under a Creative Commons Attribution-NonCommercial-NoDerivatives 4.0 International License.