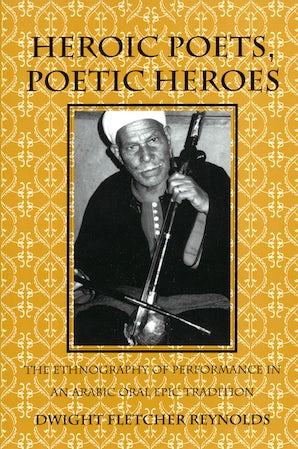 The Ethnography of Performance in an Arabic Oral Epic Tradition

An astonishingly rich oral epic that chronicles the early history of a Bedouin tribe, the Sirat Bani Hilal has been performed for almost a thousand years. In this ethnography of a contemporary community of professional poet-singers, Dwight F. Reynolds reveals how the epic tradition continues to provide a context for social interaction and commentary. Reynolds’s account is based on performances in the northern Egyptian village in which he studied as an apprentice to a master epic-singer. Reynolds explains in detail the narrative structure of the Sirat Bani Hilal as well as the tradition of epic singing. He sees both living epic poets and fictional epic heroes as figures engaged in an ongoing dialogue with audiences concerning such vital issues as ethnicity, religious orientation, codes of behavior, gender roles, and social hierarchies.

"The richness of Reynolds’s text and his scholarly accomplishment serve as poignant reminders of how little we know about Arab folk performances and how difficult it is to teach these great traditions to our students."

"Reynolds’s book both complements the works of his predecessors and surpasses them in the area on which he focuses. With it, we have a full and methodologically sophisticated treatment of the social poetics of Sirat Bani Hilal performance that is a model of how such research should be conducted."

Dwight F. Reynolds is Professor of Religious Studies at the University of California, Santa Barbara. He is the author of Arab Folklore: A Handbook and editor and coauthor of Interpreting the Self: Autobiography in the Arabic Literary Tradition and The Cambridge Companion to Modern Arab Culture.