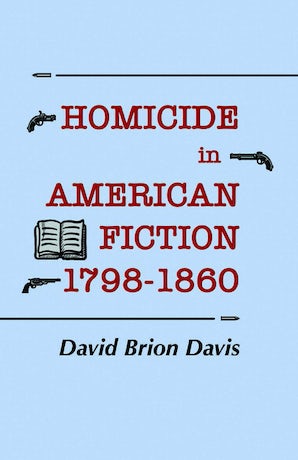 Homicide in American Fiction, 1798–1860 is licensed under a Creative Commons Attribution-NonCommercial-NoDerivatives 4.0 International License.

A Study in Social Values

Homicide has many social and psychological implications that vary from culture to culture and which change as people accept new ideas concerning guilt, responsibility, and the causes of crime. A study of attitudes toward homicide is therefore a method of examining social values in a specific setting. Homicide in American Fiction, 1798–1860 is the first book to contrast psychological assumptions of imaginative writers with certain social and intellectual currents in an attempt to integrate social attitudes toward such diverse subjects as human evil, moral responsibility, criminal insanity, social causes of crime, dueling, lynching, the "unwritten law" of a husband's revenge, and capital punishment. In addition to works of literary distinction by Cooper, Hawthorne, Irving, and Poe, among others, Davis considers a large body of cheap popular fiction generally ignored in previous studies of the literature of this period. This is an engrossing study of fiction as a reflection of and a commentary on social problems and as an influence shaping general beliefs and opinions.

"Homicide in American Fiction, 1798–1860 is an excellent reference work, one that I will use often in determining the full implication of such acts as murder and seduction, not only in pre–Civil War fiction, but also in social and psychological attitudes of the same period."

"Because the approach to an old problem is new, the book is stimulating. Because its treatment is not definitive it is provocative. It is the sort of writing that might well be used to initiate interdisciplinary discussions on both content and method."

David Brion Davis is Sterling Professor of History Emeritus at Yale University, where he is founder and director emeritus of the Gilder Lehrman Center for the Study of Slavery, Resistance, and Abolition. This was the first book of Davis’s long and distinguished career. He received the 1967 Pulitzer Prize for General Nonfiction for his second book, The Problem of Slavery in Western Culture, which was also originally published by Cornell University Press. His 2014 book The Problem of Slavery in the Age of Emancipation won the National Book Critics Circle Award in Nonfiction.

Homicide in American Fiction, 1798–1860 is licensed under a Creative Commons Attribution-NonCommercial-NoDerivatives 4.0 International License.