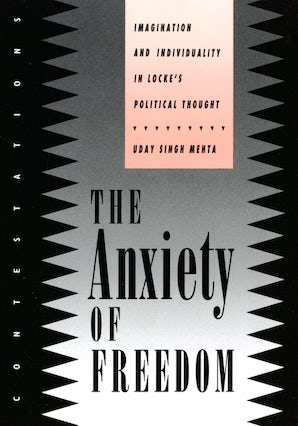 The Anxiety of Freedom is licensed under a Creative Commons Attribution-NonCommercial-NoDerivatives 4.0 International License.

The Anxiety of Freedom

The enduring appeal of liberalism lies in its commitment to the idea that human beings have a "natural" potential to live as free and equal individuals. The realization of this potential, however, is not a matter of nature, but requires that people be molded by a complex constellation of political and educational institutions. In this eloquent and provocative book, Uday Singh Mehta investigates in the major writings of John Locke the implications of this tension between individuals and the institutions that mold them. The process of molding, he demonstrates, involves an external conformity and an internal self-restraint that severely limit the scope of individuality.
Mehta explores the centrality of the human imagination in Locke’s thought, focusing on his obsession with the potential dangers of the cognitive realm. Underlying Locke’s fears regarding the excesses of the imagination is a political anxiety concerning how to limit their potential effects. In light of Locke’s views on education, Mehta concludes that the promise of liberation at the heart of liberalism is vitiated by its constraints on cognitive and political freedom.

Uday Singh Mehta is Distinguished Professor of Political Science at the Graduate Center, CUNY. He is the author of Liberalism and Empire, winner of the J. David Greenstone Prize given by the American Political Science Association.

The Anxiety of Freedom is licensed under a Creative Commons Attribution-NonCommercial-NoDerivatives 4.0 International License.