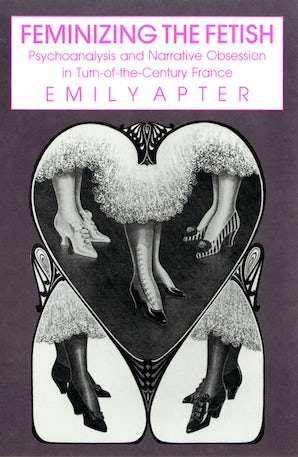 Feminizing the Fetish is licensed under a Creative Commons Attribution-NonCommercial-NoDerivatives 4.0 International License.

Shoes, gloves, umbrellas, cigars that are not just objects—the topic of fetishism seems both bizarre and inevitable. In this venturesome and provocative book, Emily Apter offers a fresh account of the complex relationship between representation and sexual obsession in turn-of-the-century French culture. Analyzing works by authors in the naturalist and realist traditions as well as making use of documents from a contemporary medical archive, she considers fetishism as a cultural artifact and as a subgenre of realist fiction. Apter traces the web of connections among fin-de-siècle representations of perversion, the fiction of pathology, and the literary case history. She explores in particular the theme of "female fetishism" in the context of the feminine culture of mourning, collecting, and dressing.

"In light of recent critical debate, one might say that of the perversions fetishism is the most widely shared. Its subjects and objects are ubiquitous, and include male and female writers, patients, and literary characters and critics. The publication of such an in-depth analysis of fetishism in turn-of-the-century French literature seemed necessary in such a climate, and Apter's insightful book fulfills the perverse reader's expectations."

Feminizing the Fetish is licensed under a Creative Commons Attribution-NonCommercial-NoDerivatives 4.0 International License.