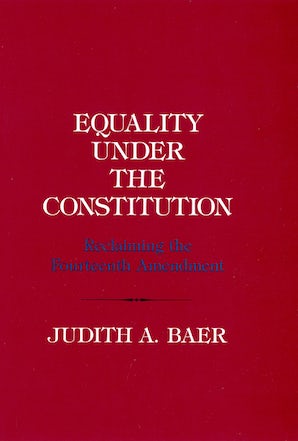 Equality under the Constitution is licensed under a Creative Commons Attribution-NonCommercial-NoDerivatives 4.0 International License.

Equality under the Constitution

The principle of equality embedded in the Declaration of Independence and reaffirmed in the Constitution does not distinguish between individuals according to their capacities or merits. It is written into these documents to ensure that each and every person enjoys equal respect and equal rights. Judith Baer maintains, however, that in fact American judicial decisions have consistently denied individuals the form of equality to which they are legally entitled—that the courts have interpreted constitutional guarantees of equal protection in ways that undermine the original intent of Congress. In Equality under the Constitution, Baer examines the background, scope, and purpose of the Constitution’s Fourteenth Amendment and the history of its interpretation by the courts. She traces the development of the idea of equality, drawing on the Bill of Rights, Congressional records, the Civil War amendments, and other sections of the Constitution. Baer discusses many of the significant equal-protection cases decided by the Supreme Court from the time of the amendment’s ratification, including decisions on reverse discrimination, age discrimination, the rights of the disabled, and gay rights. She concludes with a theory of equality more faithful to the history, language, and spirit of the Constitution.

Judith Baer is Professor of Political Science at Texas A&M University. She is the author of Our Lives Before the Law: Constructing a Feminist Jurisprudence, which won the American Political Science Association’s Victoria Schuck Award, and Ironic Freedom: Personal Choice, Public Policy, and the Politics of Reform and coauthor of Constitutional and Legal Rights for Women.

Equality under the Constitution is licensed under a Creative Commons Attribution-NonCommercial-NoDerivatives 4.0 International License.