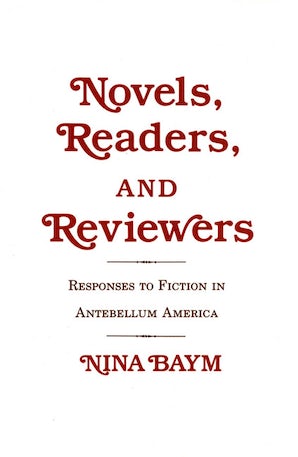 Novels, Readers, and Reviewers is licensed under a Creative Commons Attribution-NonCommercial-NoDerivatives 4.0 International License.

Responses to Fiction in Antebellum America

This book describes and characterizes responses of American readers to fiction in the generation before the Civil War. It is based on close examination of the reviews of all novels—both American and European—that appeared in major American periodicals during the years 1840–1860, a period in which magazines, novels, and novel reviews all proliferated. Nina Baym makes uses of the reviews to gain information about the formal, aesthetic, and moral expectations of reviewers. Her major conclusion is that the accepted view about the American novel before the Civil War—the view that the atmosphere in America was hostile to fiction—is a myth. There is compelling evidence, she shows, for the existence of a veritable novel industry and, concomitantly, a vast audience for fiction in the 1840s and 1850s.

"Baym’s chapters on plot and on character validate the importance of the kind of work she has done—and her acuity as a critic. Novels, Readers, and Reviewers is a fresh and exciting contribution to our understanding of the criticism and the sociology of narrative in the nineteenth century. It is a book of sovereign insights, richly earned."

Nina Baym is Emeritus Professor of English at the University of Illinois at Urbana-Champaign. She is the author of Feminism and American Literary History: Essays, Women Writers of the American West, 1833–1927, and American Women Writers and the Work of History, 1790–1860.

Novels, Readers, and Reviewers is licensed under a Creative Commons Attribution-NonCommercial-NoDerivatives 4.0 International License.