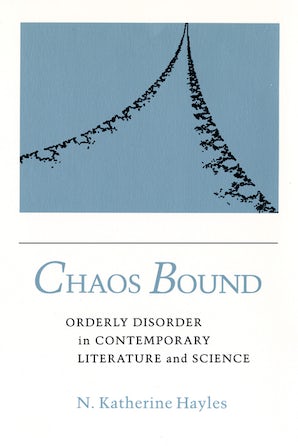 N. Katherine Hayles here investigates parallels between contemporary literature and critical theory and the science of chaos. She finds in both scientific and literary discourse new interpretations of chaos, which is seen no longer as disorder but as a locus of maximum information and complexity. She examines structures and themes of disorder in The Education of Henry Adams, Doris Lessing’s Golden Notebook, and works by Stanislaw Lem. Hayles shows how the writings of poststructuralist theorists including Barthes, Lyotard, Derrida, Serres, and de Man incorporate central features of chaos theory.

"Hayles’s point is that the almost simultaneous appearance of interest in complex systems across many disciplines—physics, mathematics, biology, information theory, literature, literary theory—signals a profound paradigm and epistemological shift. She calls the new paradigm ‘orderly disorder.’ This is a timely, informative, and enormously thought-provoking book."

N. Katherine Hayles is James B. Duke Professor of Literature at Duke University. She is the author of many books, including How We Think: Digital Media and Contemporary Technogenesis, Electronic Literature: New Horizons for the Literary, and My Mother Was a Computer: Digital Subjects and Literary Texts.