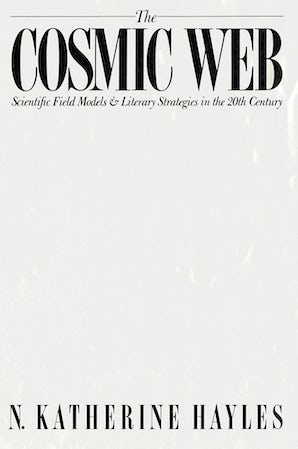 The Cosmic Web is licensed under a Creative Commons Attribution-NonCommercial-NoDerivatives 4.0 International License.

Scientific Field Models and Literary Strategies in the Twentieth Century

From the central concept of the field—which depicts the world as a mutually interactive whole, with each part connected to every other part by an underlying field— have come models as diverse as quantum mathematics and Saussure’s theory of language. In The Cosmic Web, N. Katherine Hayles seeks to establish the scope of the field concept and to assess its importance for contemporary thought. She then explores the literary strategies that are attributable directly or indirectly to the new paradigm; among the texts at which she looks closely are Robert Pirsig’s Zen and the Art of Motorcycle Maintenance, Nabokov’s Ada, D. H. Lawrence’s early novels and essays, Borges’s fiction, and Thomas Pynchon’s Gravity’s Rainbow.

"Scientists have been invoking the ‘field model’ concept for decades. But literary critics, who are usually resistant to the application of scientific concepts in literary criticism, have rarely related imaginative literature to the field model. N. Katherine Hayles, a trained chemist and literary critic, has now done so in a fine book that will pave the way for many others interested in this nexus. Hayles’s procedure is exemplary."

The Cosmic Web is licensed under a Creative Commons Attribution-NonCommercial-NoDerivatives 4.0 International License.