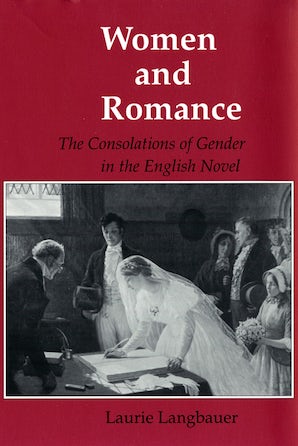 Women and Romance is licensed under a Creative Commons Attribution-NonCommercial-NoDerivatives 4.0 International License.

The Consolations of Gender in the English Novel

According to Laurie Langbauer, the notion of romance is vague precisely because it represents the chaotic negative space outside the novel that determines its form. Addressing questions of form, Langbauer reads novels that explore the interplay between the novel and romance: works by Charlotte Lennox, Mary Wollstonecraft, Charles Dickens, George Eliot, and George Meredith. She considers key issues in feminist debate, in particular the relations of feminist to the poststructuralist theories of Lacan, Derrida, and Foucault. In highlighting questions of gender in this way, Women and Romance contributes to a major debate between skeptical and materialist points of view among poststructuralist critics.

"Laurie Langbauer’s Women and Romance will interest not only readers of the English novel but readers concerned with the poststructuralist emphasis on systems of power as well. Langbauer’s book makes a significant contribution to feminist theory and provides a useful perspective on the intersection of feminism and poststructuralism."

Laurie Langbauer is Professor of English at the University of North Carolina at Chapel Hill. She is the author of Novels of Everyday Life: The Series in English Fiction, 1850–1930, also published by Cornell University Press.

Women and Romance is licensed under a Creative Commons Attribution-NonCommercial-NoDerivatives 4.0 International License.