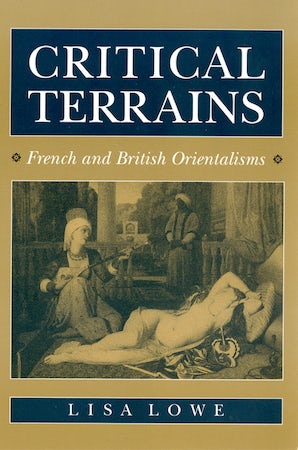 Examining and historicizing the concept of "otherness" in both literature and criticism, Lisa Lowe explores representations of non-European cultures in British and French writings from the eighteenth through the twentieth century. Lowe traces the intersections of culture, class, and sexuality in Lady Mary Wortley Montagu’s Turkish Embassy Letters and Montesquieu’s Lettres persanes and discusses tropes of orientalism, racialism, and romanticism in Flaubert. She then turns to debates in Anglo-American and Indian criticism on Forster’s Passage to India and on the utopian projection of China in the poststructuralist theories of Julia Kristeva and Roland Barthes and in the journal Tel Quel.

"A lucid and important feminist contribution to the study of orientalism. Lowe's study is particularly valuable on the issues of gender and sexuality."

"Lowe offers a helpful analysis of the ways in which West European texts represent the subordinate Other, those non-European societies and cultures defeated by European empire and figured in a vocabulary of gender and race."

Lisa Lowe is Distinguished Professor of English and Director of the Center for the Humanities at Tufts University. She is the author of The Intimacies of Four Continents and Immigrant Acts: On Asian American Cultural Politics and coauthor of The Politics of Culture in the Shadow of Capital.