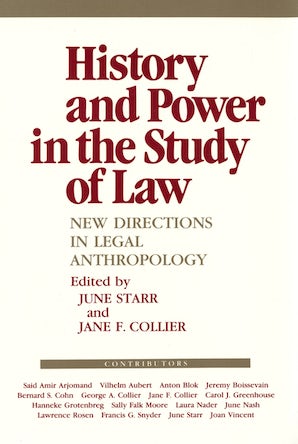 History and Power in the Study of Law is licensed under a Creative Commons Attribution-NonCommercial-NoDerivatives 4.0 International License.

History and Power in the Study of Law

Building on earlier work in the anthropology of law and taking a critical stance toward it, June Starr and Jane F. Collier ask, "Should social anthropologists continue to isolate the ‘legal’ as a separate field of study?" To answer this question, they confront critics of legal anthropology who suggest that the subfield is dying and advocate a reintegration of legal anthropology into a renewed general anthropology. Chapters by anthropologists, sociologists, and law professors, using anthropological rather than legal methodologies, provide original analyses of particular legal developments. Some contributors adopt an interpretative approach, focusing on law as a system of meaning; others adopt a materialistic approach, analyzing the economic and political forces that historically shaped relations between social groups. Contributors include Said Armir Arjomand, Anton Blok, Bernard Cohn, George Collier, Carol Greenhouse, Sally Falk Moore, Laura Nader, June Nash, Lawrence Rosen, June Starr, and Joan Vincent.

"History and Power in the Study of Law will serve as a valuable touchstone for anthropologists and other scholars interested in the light that anthropological perspectives shed on our understanding of law."

The late June Starr was Professor of Law at Indiana University. She was the author of Dispute and Settlement in Rural Turkey: An Ethnography of Law and Law as Metaphor: From Islamic Courts to the Palace of Justice. Jane F. Collier is Professor of Cultural and Social Anthropology, Emerita, at Stanford University.

History and Power in the Study of Law is licensed under a Creative Commons Attribution-NonCommercial-NoDerivatives 4.0 International License.