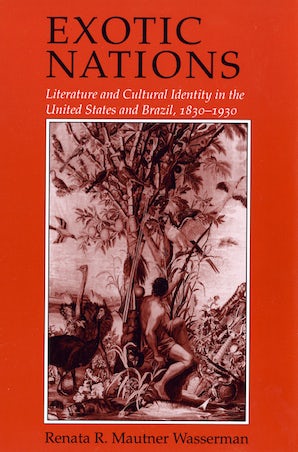 Literature and Cultural Identity in the United States and Brazil, 1830–1930

In this highly original and critically informed book, Renata R. Mautner Wasserman looks at how, during the first decades following political independence, writers in the United States and Brazil assimilated and subverted European images of an "exotic" New World to create new literatures that asserted cultural independence and defined national identity. Exotic Nations demonstrates that the language of exoticism thus became part of the New World’s interpretation of its own history and natural environment.

"Exotic Nations is a well-documented, analytical, and yet readable account. Its original arguments and historical analyses, which dispel the myth of exoticism as a superficial by-product of romanticism and shows its importance as a discourse of identity, apply to other national literatures of the Americas."

"Brazilian literature is slowly beginning to gain the respect and attention it so richly deserves. Interestingly, this long-overdue discovery of Brazil has largely come about as a function of Brazil’s presence as an ‘American,’ or ‘New World,’ culture. This, in fact, provides precisely the context for Renata Wasserman’s very enlightening and critically informed study, Exotic Nations. Taking a major step toward drawing Brazilian literature out of the isolation that has long plagued its recognition as a major national literature, Wasserman argues convincingly that in the crucial first decades following political independence, writers in both Brazil and the United States simultaneously assimilated and challenged European notions of the ‘exotic’ New World in a conscious effort to forge new national identities."