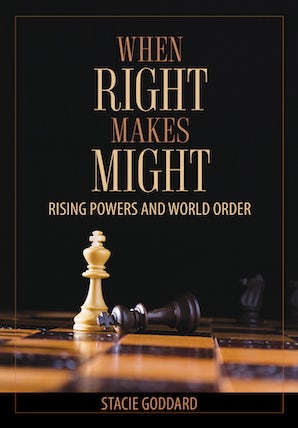 Why do great powers accommodate the rise of some challengers but contain and confront others, even at the risk of war? When Right Makes Might proposes that the ways in which a rising power legitimizes its expansionist aims significantly shapes great power responses. Stacie E. Goddard theorizes that when faced with a new challenger, great powers will attempt to divine the challenger’s intentions: does it pose a revolutionary threat to the system or can it be incorporated into the existing international order? Goddard departs from conventional theories of international relations by arguing that great powers come to understand a contender’s intentions not only through objective capabilities or costly signals but by observing how a rising power justifies its behavior to its audience. To understand the dynamics of rising powers, then, we must take seriously the role of legitimacy in international relations.

A rising power’s ability to expand depends as much on its claims to right as it does on its growing might. As a result, When Right Makes Might poses significant questions for academics and policymakers alike. Underpinning her argument on the oft-ignored significance of public self-presentation, Goddard suggests that academics (and others) should recognize talk’s critical role in the formation of grand strategy. Unlike rationalist and realist theories that suggest rhetoric is mere window-dressing for power, When Right Makes Might argues that rhetoric fundamentally shapes the contours of grand strategy. Legitimacy is not marginal to international relations; it is essential to the practice of power politics, and rhetoric is central to that practice.

"When Right Makes Might succeeds in engaging a major theoretical and politically relevant question: why do some power transitions occur peacefully while others end in conflict? Goddard presents a new theoretical take and provides a new interpretation of the evidence at hand."

"When Might Makes Right takes on a classic question—how and when existing powers cope with rising powers—and offers a novel and important answer. Stacie Goddard's insightful, deeply researched, and persuasive book argues that talk is not cheap, that how states legitimate their aims is essential to whether they are viewed as rivals or partners. It is sure to become required reading."

- Ronald Krebs, Beverly and Richard Fink Professor in the Liberal Arts and Professor of Political Science, University of Minnesota

"As long as there have been systems of states, intellectuals and practitioners have debated how to deal with rising powers. The politics of legitimation have figured in these debates but in When Right Makes Might they have at last received the sustained analysis they clearly warrant. Stacie Goddard ‘s bracingly smart and novel contribution upends a lot of today’s conventional wisdom."

Stacie E. Goddard is Jane Bishop ’51 Associate Professor of Political Science at Wellesley College. She is the author of Indivisible Territory and the Politics of Legitimacy: Jerusalem and Northern Ireland.