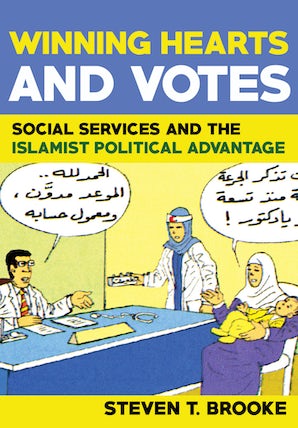 Winning Hearts and Votes is licensed under a Creative Commons Attribution-NonCommercial-NoDerivatives 4.0 International License.

In Winning Hearts and Votes, Steven Brooke argues that authoritarians often seek to manage moments of economic crisis by offloading social welfare responsibilities to non-state providers. But providers who serve poorer citizens, motivated by either charity of clientelism, will be constrained in their ability to mobilize voters because the poor depend on the state for many different goods. Organizations that serve paying customers, in contrast, may produce high quality, consistent, and effective services. This type of provision generates powerful, reputation-based linkages with a middle-class constituency more likely to support the provider on election day.

Brooke backs up his novel argument with an in-depth examination of the Egyptian Muslim Brotherhood, the archetypal organization that combines social service provision with electoral success. With a fascinating array of historical, qualitative, spatial, and experimental data he traces the Brotherhood's provision of medical services from its origins in the 1970s, through its maturation under the authoritarian regime of Hosni Mubarak, to its apogee during the country's brief democratic interlude, 2011–2013. In addition to generating new insights into authoritarian regimes, party-voter linkages and clientelism, and the relationship between political parties and social movements, Winning Hearts and Votes details the history, operations, and political effects of the Muslim Brotherhood's much discussed but little understood social service network.

"Steven Brooke’s book will sit comfortably on the shelf next to several recent classics in the political science literature by Egyptian specialists, and will be discussed alongside those by many."

"Winning Hearts and Votes is a tour de force. Steven T. Brooke’s historical research is sublime, and he makes important and concrete interventions on a number of topics to students and researchers within political science and the field of Egypt studies. This book will be the definitive account on this topic for years to come."

"In his study of the Egyptian Islamic Medical Association, Steven Brooke asks why authoritarian regimes allow non-state actors to provide services and how service delivery builds support for the Islamist opposition. This highly engaging book breaks new ground on a critically important topic."

"In this dazzling study of healthcare provision by a religiously conservative party in Egypt, Steven Brooke convinces us that service provision does not buy votes so much as it buys esteem. This is a model of empirical sophistication and precision and brings the Egyptian case into dialogue with broader literature on political parties and clientelism. This is comparative politics of the first rank."

Steven Brooke is Assistant Professor in the Department of Political Science at the University of Louisville and Associate Fellow (Non-Resident) at the Middle East Initiative, Harvard Kennedy School.

Winning Hearts and Votes is licensed under a Creative Commons Attribution-NonCommercial-NoDerivatives 4.0 International License.