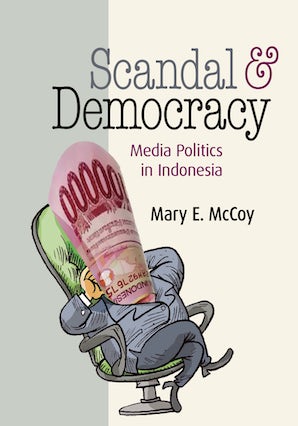 Scandal and Democracy is licensed under a Creative Commons Attribution-NonCommercial-NoDerivatives 4.0 International License.

Successful transitions to enduring democracy are both difficult and rare. In Scandal and Democracy, Mary E. McCoy explores how newly democratizing nations can avoid reverting to authoritarian solutions in response to the daunting problems brought about by sudden change. The troubled transitions that have derailed democratization in nations worldwide make this problem a major concern for scholars and citizens alike.

This study of Indonesia's transition from authoritarian rule sheds light on the fragility not just of democratic transitions but of democracy itself and finds that democratization's durability depends, to a surprising extent, on the role of the media, particularly its airing of political scandal and intraelite conflict. More broadly, Scandal and Democracy examines how the media's use of new freedoms can help ward off a slide into pseudodemocracy or a return to authoritarian rule. As Indonesia marks the twentieth anniversary of its democratic revolution of 1998, it remains among the world's most resilient new democracies and one of the few successful democratic transitions in the Muslim world. McCoy explains the media's central role in this change and corroborates that finding with comparative cases from Mexico, Tunisia, and South Korea, offering counterintuitive insights that help make sense of the success and failure of recent transitions to democracy.

"Scandal and Democracy is an excellent book which explores in depth the media in the crucial period of Indonesia's transition from authoritarian rule to democracy and beyond."

"Mary McCoy offers a fascinating and experienced analysis of Indonesian politics through the lens of the media. She puts elite collusion at the heart of Indonesia’s democratic woes and highlights the positive role that scandals can play in breaking down corrupt political arrangements."

Mary E. McCoy is a faculty associate in the Department of Communication Arts and the Center for Southeast Asian Studies at the University of Wisconsin-Madison. She holds a PhD in Communication Studies, and teaches courses on rhetoric, politics, and freedom of speech.

Scandal and Democracy is licensed under a Creative Commons Attribution-NonCommercial-NoDerivatives 4.0 International License.