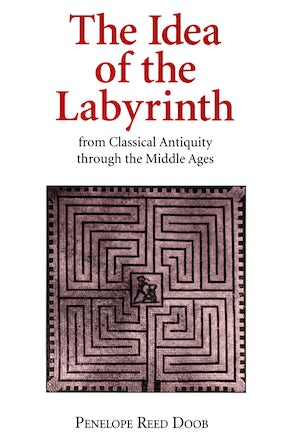 The Idea of the Labyrinth from Classical Antiquity through the Middle Ages is licensed under a Creative Commons Attribution-NonCommercial-NoDerivatives 4.0 International License.

Ancient and medieval labyrinths embody paradox, according to Penelope Reed Doob. Their structure allows a double perspective—the baffling, fragmented prospect confronting the maze-treader within, and the comprehensive vision available to those without. Mazes simultaneously assert order and chaos, artistry and confusion, articulated clarity and bewildering complexity, perfected pattern and hesitant process. In this handsomely illustrated book, Doob reconstructs from a variety of literary and visual sources the idea of the labyrinth from the classical period through the Middle Ages.

Doob first examines several complementary traditions of the maze topos, showing how ancient historical and geographical writings generate metaphors in which the labyrinth signifies admirable complexity, while poetic texts tend to suggest that the labyrinth is a sign of moral duplicity. She then describes two common models of the labyrinth and explores their formal implications: the unicursal model, with no false turnings, found almost universally in the visual arts; and the multicursal model, with blind alleys and dead ends, characteristic of literary texts. This paradigmatic clash between the labyrinths of art and of literature becomes a key to the metaphorical potential of the maze, as Doob's examination of a vast array of materials from the classical period through the Middle Ages suggests. She concludes with linked readings of four "labyrinths of words": Virgil's Aeneid, Boethius' Consolation of Philosophy, Dante's Divine Comedy, and Chaucer's House of Fame, each of which plays with and transforms received ideas of the labyrinth as well as reflecting and responding to aspects of the texts that influenced it.

Doob not only provides fresh theoretical and historical perspectives on the labyrinth tradition, but also portrays a complex medieval aesthetic that helps us to approach structurally elaborate early works. Readers in such fields as Classical literature, Medieval Studies, Renaissance Studies, comparative literature, literary theory, art history, and intellectual history will welcome this wide-ranging and illuminating book.

"An admirably argued, massively informed, and often brilliant book. It will be a widely useful source, and will lead to important new approaches to a whole range of texts and artworks. Doob includes superb new readings of Virgil, Boethius, Dante, and Chaucer."

The Idea of the Labyrinth from Classical Antiquity through the Middle Ages is licensed under a Creative Commons Attribution-NonCommercial-NoDerivatives 4.0 International License.