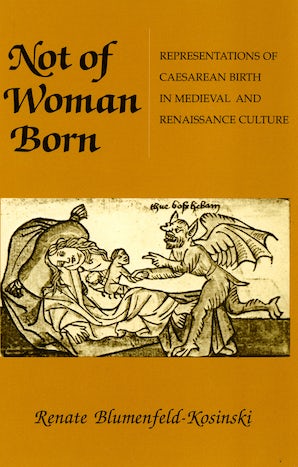 Not of Woman Born is licensed under a Creative Commons Attribution-NonCommercial-NoDerivatives 4.0 International License.

Not of Woman Born

Representations of Caesarean Birth in Medieval and Renaissance Culture

"Not of woman born, the Fortunate, the Unborn"—the terms designating those born by Caesarean section in medieval and Renaissance Europe were mysterious and ambiguous. Examining representations of Caesarean birth in legend and art and tracing its history in medical writing, Renate Blumenfeld-Kosinski addresses the web of religious, ethical, and cultural questions concerning abdominal delivery in the Middle Ages and the Renaissance. Not of Woman Born increases our understanding of the history of the medical profession, of medical iconography, and of ideas surrounding "unnatural" childbirth.

Blumenfeld-Kosinski compares texts and visual images in order to trace the evolution of Caesarean birth as it was perceived by the main actors involved—pregnant women, medical practitioners, and artistic or literary interpreters. Bringing together medical treatises and texts as well as hitherto unexplored primary sources such as manuscript illuminations, she provides a fresh perspective on attitudes toward pregnancy and birth in the Middle Ages and the Renaissance; the meaning and consequences of medieval medicine for women as both patients and practitioners, and the professionalization of medicine. She discusses writings on Caesarean birth from the twelfth and thirteenth centuries, when Church Councils ordered midwives to perform the operation if a mother died during childbirth in order that the child might be baptized; to the fourteenth century, when the first medical text, Bernard of Gordon's Lilium medicinae, mentioned the operation; up to the gradual replacement of midwives by male surgeons in the fifteenth and sixteenth centuries. Not of Woman Born offers the first close analysis of Frarnois Rousset's 1581 treatise on the operation as an example of sixteenth-century medical discourse. It also considers the ambiguous nature of Caesarean birth, drawing on accounts of such miraculous examples as the birth of the Antichrist. An appendix reviews the complex etymological history of the term "Caesarean section."

Richly interdisciplinary, Not of Woman Born will enliven discussions of the controversial issues surrounding Caesarean delivery today. Medical, social, and cultural historians interested in the Middle Ages and the Renaissance, historians, literary scholars, midwives, obstetricians, nurses, and others concerned with women's history will want to read it.

"Vividly tracing the evolution of Caesarean birth from the early 1300s (when the operation was performed almost exclusively by midwives) through the Renaissance period (when midwives were considered witches and male surgeons took control), Blumenfeld-Kosinski... does more than provide [an] engrossingly accessible, historical account of the now-commonplace procedure—she unveils the roots of a medical misogyny that still prevails today. A richly cross-disciplined study utilizing depictions of Caesarean delivery in art, literature, and medical texts and illuminations (illustrations), [this book] is a captivating and revealing work that will be relished by readers of medical and cultural history, as well as by those who are interested in the subject of male dominance over women."

"Blumenfeld-Kosinski's exploration of Caesarean birth offers new and unexpected vistas into the lives and thoughts of medieval and Renaissance women and men."

"This animated, richly documented, and cross-disciplinary study has the essential ingredients of a broadly appealing book. It also makes an original contribution to scholarship by systematically examining pre-modern Caesarean section under two complementary aspects, namely as a topos by itself and as a touchstone of the fate of medieval women."

Renate Blumenfeld-Kosinski is Associate Professor of French at Columbia University.

Not of Woman Born is licensed under a Creative Commons Attribution-NonCommercial-NoDerivatives 4.0 International License.