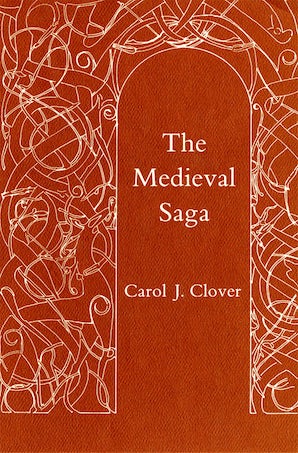 The Medieval Saga is licensed under a Creative Commons Attribution-NonCommercial-NoDerivatives 4.0 International License.

Written in the thirteenth century, the Icelandic prose sagas, chronicling the lives of kings and commoners, give a dramatic account of the first century after the settlement of Iceland—the period from about 930 to 1050. To some extent these elaborate tales are written versions of traditional sagas passed down by word of mouth. How did they become the long and polished literary works that are still read today?

The evolution of the written sagas is commonly regarded as an anomalous phenomenon, distinct from contemporary developments in European literature. In this groundbreaking study, Carol J. Clover challenges this view and relates the rise of imaginative prose in Iceland directly to the rise of imaginative prose on the Continent. Analyzing the narrative structure and composition of the sagas and comparing them with other medieval works, Clover shows that the Icelandic authors, using Continental models, owe the prose form of their writings, as well as some basic narrative strategies, to Latin historiography and to French romance.

"A study of this breadth and depth could be made only by a scholar with a wide and intimate understanding of medieval literature, a comprehensive knowledge of the enormous critical literature, and a strong and sure command of structuralist method. I regard this work as one of the most original and substantial contributions to saga scholarship that I have had the pleasure to read."

Carol J. Clover is Associate Professor in the Department of Scandinavian at the University of California, Berkeley.

The Medieval Saga is licensed under a Creative Commons Attribution-NonCommercial-NoDerivatives 4.0 International License.