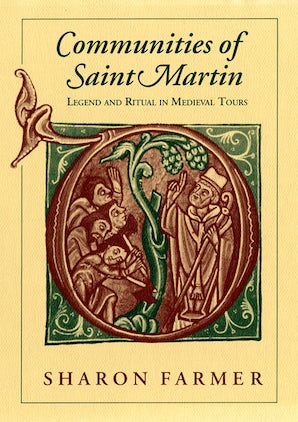 Communities of Saint Martin is licensed under a Creative Commons Attribution-NonCommercial-NoDerivatives 4.0 International License.

Legend and Ritual in Medieval Tours

Sharon Farmer here investigates the ways in which three medieval communities—the town of Tours, the basilica of Saint-Martin there, and the abbey of Marmoutier nearby—all defined themselves through the cult of Saint Martin. She demonstrates how in the early Middle Ages the bishops of Tours used the cult of Martin, their fourthcentury predecessor, to shape an idealized image of Tours as Martin's town. As the heirs to Martin's see, the bishops projected themselves as the rightful leaders of the community. However, in the late eleventh century, she shows, the canons of Saint-Martin (where the saint's relics resided) and the monks of Marmoutier (which Martin had founded) took control of the cult and produced new legends and rituals to strengthen their corporate interests. Since the basilica and the abbey differed in their spiritualities, structures, and external ties, the canons and monks elaborated and manipulated Martin's cult in quite different ways. Farmer shows how one saint's cult lent itself to these varying uses, and analyzes the strikingly dissimilar Martins that emerged. Her skillful inquiry into the relationship between group identity and cultural expression illuminates the degree to which culture is contested territory. Farmer's rich blend of social history and hagiography will appeal to a wide range of medievalists, cultural anthropologists, religious historians, and urban historians.

Sharon Farmer is Associate Professor of History at the University of California, Santa Barbara. She is the author of Communities of Saint Martin: Legend and Ritual in Medieval Tours, also from Cornell.

Communities of Saint Martin is licensed under a Creative Commons Attribution-NonCommercial-NoDerivatives 4.0 International License.