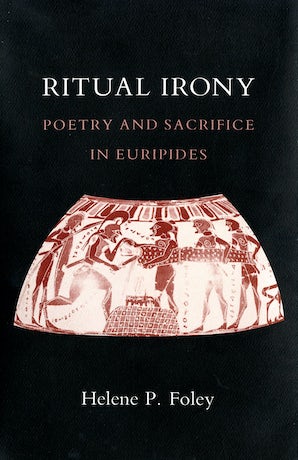 Poetry and Sacrifice in Euripides

Ritual Irony is a critical study of four problematic later plays of Euripides: the Iphigenia in Aulis, the Phoenissae, the Heracles, and the Bacchae.

Examining Euripides' representation of sacrificial ritual against the background of late fifth-century Athens, Helene P. Foley shows that each of these plays confronts directly the difficulty of making an archaic poetic tradition relevant to a democratic society. She explores the important mediating role played by choral poetry and ritual in the plays, asserting that Euripides' sacrificial metaphors and ritual performances link an anachronistic mythic ideal with a world dominated by "chance" or an incomprehensible divinity.
Foley utilizes the ideas and methodology of contemporary literary theory and symbolic anthropology, addressing issues central to the emerging dialogue between the two fields. Her conclusions have important implications for the study of Greek tragedy as a whole and for our understanding of Euripides' tragic irony, his conception of religion, and the role of his choral odes.

Assuming no specialized knowledge, Ritual Irony is aimed at all readers of Euripidean tragedy. It will prove particularly valuable to students and scholars of classics, comparative literature, and symbolic anthropology.

"The author's treatment of four Euripidean tragedies produces both a new argument for the unity of these plays and an original and compelling way of reading Euripidean irony."