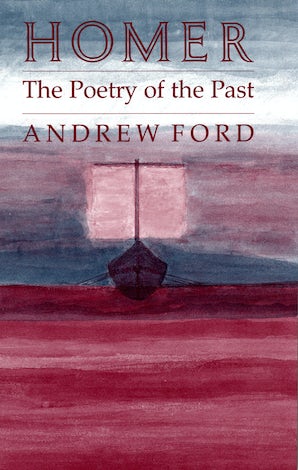 Homer is licensed under a Creative Commons Attribution-NonCommercial-NoDerivatives 4.0 International License.

The Poetry of the Past

Andrew Ford here addresses, in a manner both engaging and richly informed, the perennial questions of what poetry is, how it came to be, and what it is for. Focusing on the critical moment in Western literature when the heroic tales of the Greek oral tradition began to be preserved in writing, he examines these questions in the light of Homeric poetry. Through fresh readings of the Iliad and the Odyssey, and referring to other early epics as well, Ford deepens our understanding of what poetry was at a time before written texts, before a developed sense of authorship, and before the existence of institutionalized criticism.

Placing what is known about Homer's art in the wider context of Homer's world, Ford traces the effects of the oral tradition upon the development of the epic and addresses such issues as the sources of the poet's inspiration and the generic constraints upon epic composition. After exploring Homer's poetic vocabulary and his fictional and mythical representations of the art of singing, Ford reconstructs an idea of poetry much different from that put forth by previous interpreters. Arguing that Homer grounds his project in religious rather than literary or historical terms, he concludes that archaic poetry claims to give a uniquely transparent and immediate rendering of the past.

Homer: The Poetry of the Past will be stimulating and enjoyable reading for anyone interested in the traditions of poetry, as well as for students and scholars in the fields of classics, literary theory and literary history, and intellectual history.

Andrew Ford is Assistant Professor of Classics at Princeton University.

Homer is licensed under a Creative Commons Attribution-NonCommercial-NoDerivatives 4.0 International License.