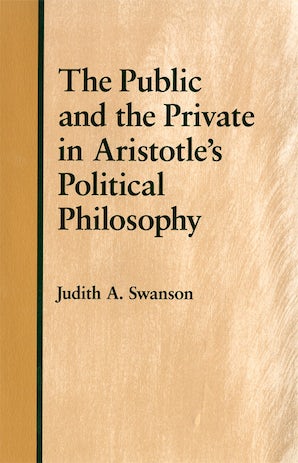 The Public and the Private in Aristotle's Political Philosophy is licensed under a Creative Commons Attribution-NonCommercial-NoDerivatives 4.0 International License.

The Public and the Private in Aristotle's Political Philosophy

Aristotle offers a conception of the private and its relationship to the public that suggests a remedy to the limitations of liberalism today, according to Judith A. Swanson. In this fresh and lucid interpretation of Aristotle's political philosophy, Swanson challenges the dominant view that he regards the private as a mere precondition to the public. She argues, rather, that for Aristotle private activity develops virtue and is thus essential both to individual freedom and happiness and to the well-being of the political order.

Swanson presents an innovative reading of The Politics which revises our understanding of Aristotle's political economy and his views on women and the family, slavery, and the relation between friendship and civic solidarity. She examines the private activities Aristotle considers necessary to a complete human life—maintaining a household, transacting business, sustaining friendships, and philosophizing. Focusing on ways Aristotle's public invests in the private through law, rule, and education, she shows how the public can foster a morally and intellectually virtuous citizenry. In contrast to classical liberal theory, which presents privacy as a shield of rights protecting individuals from one another and from the state, for Aristotle a regime can attain self-sufficiency only by bringing about a dynamic equilibrium between the public and the private.

The Public and the Private in Aristotle's Political Philosophy will be essential reading for scholars and students of political philosophy, political theory, classics, intellectual history, and the history of women.

Judith A. Swanson is Assistant Professor of Political Science at Boston University.

The Public and the Private in Aristotle's Political Philosophy is licensed under a Creative Commons Attribution-NonCommercial-NoDerivatives 4.0 International License.