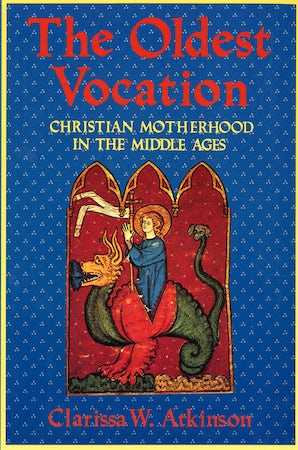 The Oldest Vocation is licensed under a Creative Commons Attribution-NonCommercial-NoDerivatives 4.0 International License.

Christian Motherhood in the Medieval West

According to an old story, a woman concealed her sex and ruled as pope for a few years in the ninth century. Pope Joan was not betrayed by a lover or discovered by an enemy; her downfall came when she went into labor during a papal procession through the streets of Rome. From the myth of Joan to the experiences of saints, nuns, and ordinary women, The Oldest Vocation brings to life both the richness and the troubling contradictions of Christian motherhood in medieval Europe.

After tracing the roots of medieval ideologies of motherhood in early Christianity, Clarissa W. Atkinson reconstructs the physiological assumptions underlying medieval notions about women's bodies and reproduction; inherited from Greek science and popularized through the practice of midwifery, these assumptions helped shape common beliefs about what mothers were. She then describes the development of "spiritual motherhood" both as a concept emerging out of monastic ideologies in the early Middle Ages and as a reality in the lives of certain remarkable women. Atkinson explores the theological dimensions of medieval motherhood by discussing the cult of the Virgin Mary in twelfth-century art, story, and religious expression. She also offers a fascinating new perspective on the women saints of the later Middle Ages, many of whom were mothers; their lives and cults forged new relationships between maternity and holiness. The Oldest Vocation concludes where most histories of motherhood begin—in early modern Europe, when the family was institutionalized as a center of religious and social organization.

Anyone interested in the status of motherhood, or in women's history, the cultural history of the Middle Ages, or the history of religion will want to read this book.

Clarissa W. Atkinson is Associate Dean for Academic Affairs and Senior Lecturer in the History of Christianity at the Harvard University Divinity School. She is the author of The Oldest Vocation: Christian Motherhood in the Medieval West and Mystic and Pilgrim: The Book and the World of Margery Kempe, both from Cornell.

The Oldest Vocation is licensed under a Creative Commons Attribution-NonCommercial-NoDerivatives 4.0 International License.