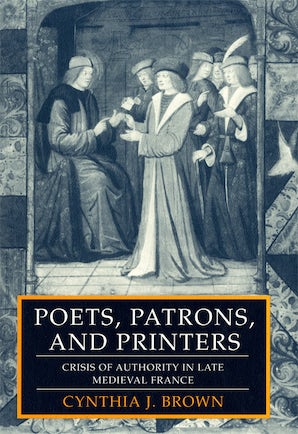 Poets, Patrons, and Printers is licensed under a Creative Commons Attribution-NonCommercial-NoDerivatives 4.0 International License.

Cynthia J. Brown explains why the advent of print in the late medieval period brought about changes in relationships among poets, patrons, and printers which led to a new conception of authorship.

Examining such paratextual elements of manuscripts as title pages, colophons, and illustrations as well as such literary strategies as experimentation with narrative voice, Brown traces authors' attempts to underscore their narrative presence in their works and to displace patrons from their role as sponsors and protectors of the book. Her accounts of the struggles of poets, including Jean Lemaire, Jean Bouchet, Jean Molinet, and Pierre Gringore, over the design, printing, and sale of their books demonstrate how authors secured the status of literary proprietor during the transition from the culture of script and courtly patronage to that of print capitalism.

Cynthia J. Brown is Professor of French at the University of California, Santa Barbara.

Poets, Patrons, and Printers is licensed under a Creative Commons Attribution-NonCommercial-NoDerivatives 4.0 International License.