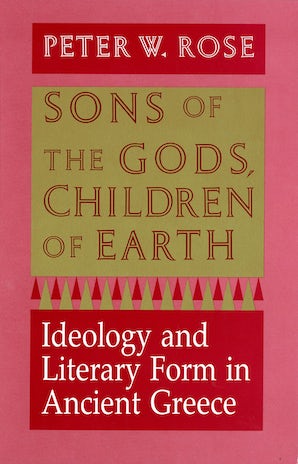 Sons of the Gods, Children of Earth is licensed under a Creative Commons Attribution-NonCommercial-NoDerivatives 4.0 International License.

Sons of the Gods, Children of Earth

In this ambitious and venturesome book, Peter W. Rose applies the insights of Marxist theory to a number of central Greek literary and philosophical texts. He explores major points in the trajectory from Homer to Plato where the ideology of inherited excellence—beliefs about descent from gods or heroes—is elaborated and challenged. Rose offers subtle and penetrating new readings of Homer's Iliad and Odyssey, Pindar's Tenth Pythian Ode, Aeschylus's Oresteia, Sophokles' Philoktetes, and Plato's Republic.

Rose rejects the view of art as a mere reflection of social and political reality—a view that is characteristic not only of most Marxist but of most historically oriented treatments of classical literature. He applies instead a Marxian hermeneutic derived from the work of the Frankfurt School and Fredric Jameson. His readings focus on illuminating a politics of form within the text, while responding to historically specific social, political, and economic realities. Each work, he asserts, both reflects contemporary conflicts over wealth, power, and gender roles and constitutes an attempt to transcend the status quo by projecting an ideal community. Following Marx, Rose maintains that critical engagement with the limitations of the utopian dreams of the past is the only means to the realization of freedom in the present.

Classicists and their students, literary theorists, philosophers, comparatists, and Marxist critics will find Sons of the Gods, Children of Earth challenging reading.

Sons of the Gods, Children of Earth is licensed under a Creative Commons Attribution-NonCommercial-NoDerivatives 4.0 International License.