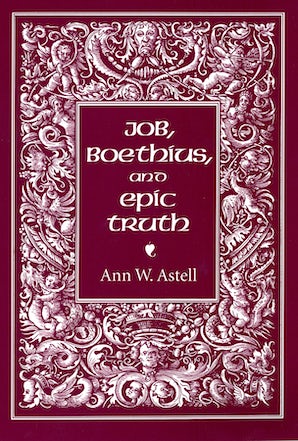 Calling into question the common assumption that the Middle Ages produced no secondary epics, Ann W. Astell here revises a key chapter in literary history. She examines the connections between the Book of Job and Boethius' s Consolation of Philosophy—texts closely associated with each other in the minds of medieval readers and writers—and demonstrates that these two works served as a conduit for the tradition of heroic poetry from antiquity through the Middle Ages and into the Renaissance. As she traces the complex influences of classical and biblical texts on vernacular literature, Astell offers provocative readings of works by Dante, Chaucer, Spenser, Malory, Milton, and many others. Astell looks at the relationship between the historical reception of the epic and successive imitative forms, showing how Boethius's Consolation and Johan biblical commentaries echo the allegorical treatment of" epic truth" in the poems of Homer and Virgil, and how in turn many works classified as "romance" take Job and Boethius as their models. She considers the influences of Job and Boethius on hagiographic romance, as exemplified by the stories of Eustace, Custance, and Griselda; on the amatory romances of Abelard and Heloise, Dante and Beatrice, and Troilus and Criseyde; and on the chivalric romances of Martin of Tours, Galahad, Lancelot, and Redcrosse. Finally, she explores an encyclopedic array of interpretations of Job and Boethius in Milton's Paradise Lost, Paradise Regained, and Samson Agonistes.

"Though present-day critics, who concentrate on form, generally find the epic discontinuous in the Middle Ages, Astell argues that the genre persisted as the biblical book of Job and Boethius's Consolation of Philosophy were imitated and alluded to as examples throughout the period.... The scholarship is prodigious, the argument convincing, and the Christian stance congenial to the subject. Highly recommended."

Ann W. Astell is Professor of English at Purdue University. She is the author of Chaucer and the Universe of Learning; Job, Boethius, and Epic Truth, and The Song of Songs in the Middle Ages, all from Cornell.