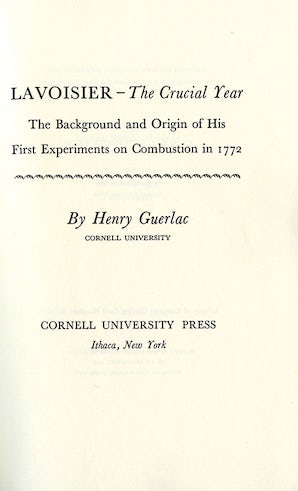 The author explores the origins of the eighteenth-century chemical revolution as it centers on Antoine-Laurent Lavoisier's earliest work on combustion. He shows that the main lines of Lavoisier's theory—including his theory of a heat-fluid, caloric—were elaborated well before his discovery of the role played by oxygen. Contrary to the opinion prevailing at that time, Lavoisier suspected, and demonstrated by experiment, that common air, or some portion of it, combines with substances when they are burned. Professor Guerlac examines critically the theories of other historians of science concerning these first experiments, and tries to unravel the influences which French, German, and British chemists may have had on Lavoisier. He has made use of newly discovered material on this phase of Lavoisier's career, and includes an appendix in which the essential documents are printed together for the first time.