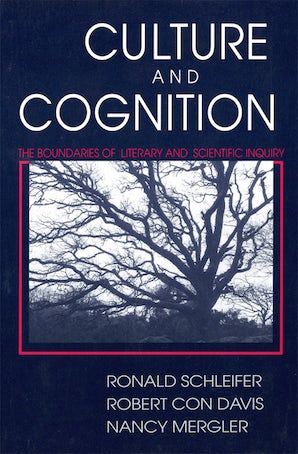 Culture and Cognition is licensed under a Creative Commons Attribution-NonCommercial-NoDerivatives 4.0 International License.

The Boundaries of Literary and Scientific Inquiry

This groundbreaking book challenges the disciplinary boundaries that have traditionally separated scientific inquiry from literary inquiry. It explores scientific knowledge in three subject areas—the natural history of aging, literary narrative, and psychoanalysis. In the authors' view, the different perspectives on cognition afforded by Anglo-American cognitive science, Greimassian semiotics, and Lacanian psychoanalysis help us to redefine our very notion of culture.

Part I historically situates the concepts of meaning and truth in twentieth-century semiotic theory and cognitive science. Part II contrasts the modes of Freudian case history to the general instance of Einstein's relativity theory and then sets forth a rhetoric of narrative based on the discourse of the aged. Part III examines in the context of literary studies an interdisciplinary concept of cultural cognition.

Culture and Cognition will be essential reading for literary theorists, historians and philosophers of science; semioticians; and scholars and students of cultural studies, the sociology of literature, and science and literature.

Culture and Cognition is licensed under a Creative Commons Attribution-NonCommercial-NoDerivatives 4.0 International License.